Next up for the Somerset Hills–show jumping

The last 18 months or so have been full of good news for equestrian fans and participants in New Jersey’s Somerset Hills, an area that is revving up to once again be a center of multi-discipline horse sports—which also is a positive for those much further afield who are eager to be part of it.

Following the announcement that the Essex Horse Trials will be revived in 2017 after an absence of 19 years, an exhibition competition was staged in June at Moorland Farm in Far Hills as a preview of the event itself. The fact that it drew such stars as Jennie Brannigan (the winner), longtime Essex competitor Buck Davidson and local favorites Sinead Halpin and Holly Payne Caravella was an indicator of great interest in the project, which also has drawn a good response as it seeks volunteers to help stage the competition.

This shot of Holly Payne Caravella at the Essex Horse Trials Derby Cross in June shows off the beauty of Moorland Farm. (Photo by Nancy Jaffer)

In August, the debut of Monmouth at the Team–relocating New Jersey’s oldest show from Monmouth County to the U.S. Equestrian Team Foundation’s Gladstone headquarters in Somerset County–drew a great entry for a triumphant debut.

Word last month that the Grand Prix, Intermediaire I and Brentina Cup U.S. Equestrian Federation dressage championships are returning to the foundation facility in May 2017 is another boost.

And now here’s one more: Moorland Farm could host a prestigious show jumping competition in 2018 if it is chosen as the site of a Longines FEI World Cup™ Jumping North American League qualifier. When the USEF asked who would be interested in bidding to hold such a competition, Guy Torsilieri raised his hand. Guy heads up the Far Hills Race Meeting at Moorland that draws more than 30,000 people to the venue in October.

“Moorland Farm threw our hat in the ring,” said Guy, who filed an expression of interest by the Nov. 16 deadline and is waiting for details in the formal Request for Proposal that is due to come out early next year. At that point, he noted, the requirements can be analyzed “and we can decide if we want to proceed, but I think we probably will.”

If Moorland gets the qualifier, Guy envisions a set-up something like the one for the highly successful show put on by Equestrian Sport Productions in Central Park, which is not involved with the World Cup series. Footing is trucked into Central Park for the competition, which includes show jumping, hunters and dressage, and then trucked out again. Guy pointed out that footing has a limited lifespan, so it’s better to lease a state-of-the-art surface when it’s needed, rather than letting it sit and deteriorate when it is used only once or twice a year. An infrastructure involving a base and drainage at Moorland could be used for Essex as well, along with any other competitions staged subsequently, Guy said. 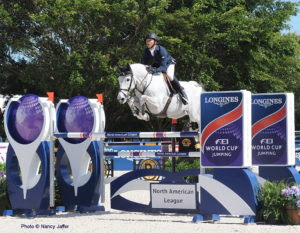 The Longines FEI World Cup™ Jumping qualifiers, like the one where Kent Farrington was victorious in February at the Wellington Masters, have impressive signage as part of their program. (Photo by Nancy Jaffer)

The Longines NAL cut a large number of qualifiers to focus on 14 in North America, with seven in the East and seven in the West. Shows involved in that program were selected for a three-year run, beginning with the 2015-2016 season. The 2016-2017 season ends with the final in Omaha March 29-April 2, and the third season begins in June 2017. The USEF is looking for candidates to present NAL classes starting with the 2018-2019 season.

The qualifiers are always part of a show, such as the Wellington Masters and the Live Oak International, both in Florida, and the American Gold Cup in Westchester County, N.Y. Guy noted that more than the one class would be offered if Moorland won the bid. While most shows bidding likely will have held jumping competitions previously—something Moorland hasn’t done—it’s worth noting that the Wellington Masters is at a site which did not have a history of offering a major show, though jumping classes had been presented there before it staged its first qualifier last February.

Asked about how many entities came forward  before last month’s deadline, Jennifer Haydon, the USEF’s director of jumping for national programs, replied, “We had a fair amount. We had a lot of interest in that. The FEI is going to work with us on getting more information so these guys know what it’s all about before they actually submit a bid.” She noted that all the U.S. venues that already are hosting qualifiers (which is all the USEF deals with, since others are in Canada and Mexico) want to continue. A decision on the 2018-19 qualifiers is not expected until April.

Even if Moorland does not get a Longines qualifier, it still is likely show jumping competition will be held there eventually.

“It’s something that interests us,” Guy said of the qualifier, while at the same time noting, “We may not do it, but it’s showing everybody we’re not just going to stop at the Far Hills Races, Essex Horse Trials, Monmouth at the Team. There are going to be other opportunities. There’s going to continue to be substantial equestrian growth in this area. We don’t have any specific plans yet, but show jumping at Moorland Farm is definitely on the radar.”

The two men understand that there has to be something besides the equestrian portion of a competition to bring folks in the door, which is why there are plans for the Essex Horse Trials to have a car show and a vendor village, along with plenty of hospitality (also a hallmark of the Monmouth show).

In June 2015, the Gladstone Gathering at the USET Foundation headquarters brought together people from the community with an interest in seeing more equestrian competitions in the area. The Essex revival grew out of that party, which was spearheaded by Jimmy, whose family owned Hamilton Farm when it was a vast estate. He led the way in rejuvenating the Gladstone Equestrian Association, which in its heyday presented the landmark 1993 World Pair Driving Championships. Its new iteration, with a board drawn from several disciplines, is geared to “attract, promote and retain” equestrian activities.

So stay tuned. They say about stock funds that past performance is no guarantee of future results, but that type of warning doesn’t seem applicable to this initiative, which is in the right place at the right time and fueled by action as well as enthusiasm.