What’s next for Moorland Farm? 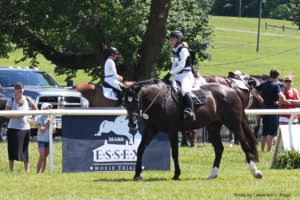 Riders such as Lynn Jones, finishing her competition with My My My Delilah, were all smiles at the revival of the Mars Essex Horse Trials. (Photo by Lawrence J. Nagy)

Moorland Farm in Far Hills is on the brink of becoming a new center for equestrian activity, following the successful rebirth of the Mars Essex Horse Trials last weekend.

As the event concluded, “I made it very clear to everybody that this wasn’t the end, it’s just the beginning,” said Guy Torsilieri, chairman of the Far Hills Race Meeting, held every October at Moorland. He wants to see more non-racing competitions at the former estate on Route 202.

Essex, with an organizing committee co-chaired by Ralph Jones and cross-country course designer Morgan Rowsell, drew thousands of spectators. Guy wants the other competitions staged at Moorland geared toward bringing crowds in as well. It had definite community support, including Far Hills Mayor Paul Vallone, who was seen all around the venue.

Calling Essex “a smash hit” and citing its draw to the general public, Guy said, “There were a lot of people there who knew very little about eventing.” 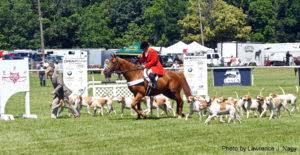 The Essex Fox Hounds were among the exhibitions at the Mars Essex Horse Trials. (Photo by Lawrence J. Nagy)

He was pleased that they were drawn not only by the horses, but also by the vendors, the food court, a chance to get out in the countryside and the opportunity to visit the car show staged Sunday.

There also were several exhibitions from the area; the Essex Foxhounds, the Tewksbury Foot Bassets and side-saddle riders.

Looking ahead, Guy is planning for a jumping competition on the Wednesday or Thursday after Essex 2018 while the event’s infrastructure is still in place, but he’s also mulling a hunter derby and other possibilities for the Moorland calendar. That could even include an Arabian show. Meanwhile, he feels it is important to have something on the agenda at Moorland before the next renewal of Essex.

“I don’t want to wait another year,” he explained, commenting that he is “all ears” for ideas about what could be held at Moorland.

Although offering higher levels were discussed for Essex 2018, Guy feels it might be better for one more year to stick with the Beginner Novice, Novice, Training and Preliminary levels offered for 2017 as organizers work to perfect their offering.

“There were so many variables for this year that I think we’ll probably do a rerun for next year, just so we get it really right. We think Essex was a great success, a great re-start. We have a lot of work to do to make it even better for next year,” he commented.

That will include moving the dressage rings to higher ground. True, three inches of rain the night before the event began wasn’t optimum for the rings, but they were really too low in any case, and Guy would like to see them a bit closer to the action. The stables flooded because of the rain, and those might be moved too, though without the deluge they probably would have been fine.

The grass arena used for jumping was very deep for the first division on Saturday post-rain, but organizers made an effort to improve it following that.

“I’m comfortable (that) after aerating, rolling and the way we resurfaced the turf between classes at Essex, we’re ready to continue to have equestrian jumping events on turf at Moorland,” said Guy, who is not planning to go with artificial footing at this point. He said the grass in the jumping arena was relatively new without a deep root structure, but believes it will greatly improve by next year.

Essex, started in 1968 on the Haller family’s Hoopstick Farm in Bedminster, moved to the U.S. Equestrian Team headquarters in Gladstone, where it ran for the last time on its 30th anniversary in 1998 after development at Hamilton Farm involved space issues that precluded running an event there. 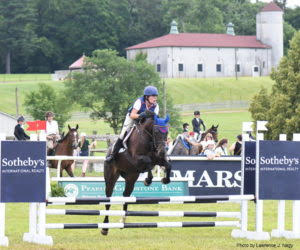 So many people had memories of Essex they shared during the running of the revival. Virginia Jenkins Rowsell, wife of the course designer, talked about what it was like to win at the old Essex.

Ann Haller, whose late husband, Roger, started Essex, was involved as a volunteer last weekend. The evening before the event got under way, she chatted about her thoughts on Essex.

Wendy Furlong was amateur champion in the 1-star at Essex in 1998, and decided she needed to ride in the event again with her Santa Lisa.

“When I saw this was coming, I said, `I’m going to have to go back and have a crack at Beginner Novice with a homebred horse that I hadn’t even really thought about starting to event again,’” she said.

She realized, “That would be something kind of fun to aim for. It’s a fabulous facility. When you’re galloping up there on the racetrack in front of that beautiful vista, you might as well be at Badminton–that’s as close as most of us are ever going to get. It’s a beautiful piece of property to be able to enjoy,” said Wendy, fourth in the Open Beginner Novice.

Many of the biggest eventing stars, such as Boyd Martin and Phillip Dutton, were missing this time around because they were riding in the upper levels at the Surefire event in Virginia last weekend. But at Essex, where Preliminary was the top level, there were a few boldface names, including Buck Davidson, who swept the first four places in the Open Prelim, and Jennie Brannigan, who won the Open Novice.

Yet one of the beauties of Essex was that it emerged as a destination event for amateurs and young people at the lower levels. Normally, they’d be riding at a no-frills venue; Essex had across-the-board panache.

“It was big atmosphere for a horse trials,” said Lauren Chumley, a professional dressage trainer who rides out of Stonebridge Farm in Pittstown.

“There’s a lot going on. This is a really cool event, because you get your horses out to see so much. In the (cross-country) water (complex), there’s bleachers, a ton of people. That doesn’t happen at the little horse trials. All these people came to watch who don’t know anything about horses. That’s fun.” 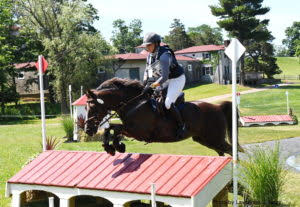 Lauren moved to New Jersey from Ohio 10 years ago, so she never attended Essex, but knew its reputation.

“I think it’s really fun to be here at its revival, and its 25 minutes from our house. It’s absolutely beautiful.”

One of the four horses Lauren rode was Avatar’s Jazzman, a Morgan owned by Melissa Dowling and Glenn Campbell, on whom she was in the ribbons at Dressage at Devon. Morgans are known for their versatility, so it wasn’t a stretch for Jazz to be eventing.

“I had a blast. I think this is a really cool horse trials. I think they made a nice, straightforward Beginner Novice and Novice courses,” said Lauren.

“The Training was challenging, but I think that’s what they set out to do. The course designer didn’t just throw logs on the grass. He really thought out how that Training course ran and I thought it ran very, very well. It would have been very tough if it was a first Training for some horse, but Jazz ate it up.

“He was so fast today. He’s a Morgan, so he’s kind of roundish, so he looks a little bit like a pork chop, but he’s not. He’s fitter than you think.”

She doesn’t believe he’ll move up a division.

She started out well in the Novice Rider section, winning the dressage phase on the 14.1-hand Nikolas. But since he was in the first show jumping group on the Saturday, the stadium phase didn’t go well.

“I’ve never jumped him in mud like that before. He just couldn’t get off the ground. We all struggled in the footing. The cross-country footing stayed solid,” she continued, noting he was fine there, and that the stadium jumping footing was better on Sunday. Lauren felt that organizers did a good job handling what came their way. 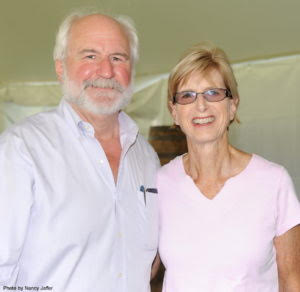 U.S. Equestrian Team Foundation Deputy Executive Director Jim Wolf kept running into people he knew as he walked around the grounds, which was a big plus for him.

“Now that there’s something so close to home, all the horse people can come here and we see each other at home. We’re all so busy traveling to horse shows and being in the horse business, we never see each other at a hometown event. It’s nice to have it back.”

Former New Jersey Governor Christie Whitman was enthusiastic about the event, going on the guided course walk, where she asked insightful questions, and then attending the competition daily.  She’s hoping to return in 2018 as a volunteer doing “whatever they need done. I’d be happy to judge fences, I’d be happy to pick up rails.”

As a member of the Somerset Hills Pony Club in her youth, she even competed in an event, the national Pony Club rally in Kentucky. So Essex really struck a chord with her.

“It’s been fabulous,” she said.