The Garden State show is on an exciting journey to Gladstone 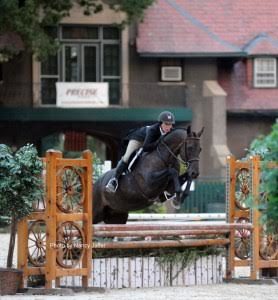 The 2019 Garden State Horse Show will be able to take advantage of the iconic background provided by the U.S. Equestrian Team Foundation’s historic stable for the Monmouth at the Team show over the last two years. (Photo© 2018 by Nancy Jaffer)

Garden State, set to run its 69th edition April 27-May 5, is following the lead of the Monmouth County Horse Show, which left Freehold for the foundation grounds in Somerset County two years ago. The third edition of what is now called Monmouth at the Team is set for Aug. 12-20, but Monmouth has long been billed as the oldest continually running show in the country. 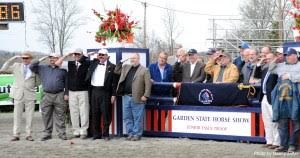 Men who grew up in the Junior Essex Troop have an annual reunion as they put on the Garden State Horse Show. (Photo© 2018 by Nancy Jaffer)

With the move, Monmouth became a boutique one-ring show, rather than a multi-ring affair, in a setting that is a big selling point. People enjoy riding in the same arena (albeit with new state-of-the-art footing) where the likes of show jumping legends including Bill Steinkraus, Frank Chapot and George Morris trained. A Monmouth trademark is the hospitality in a ringside tent, offering a warm welcome, music, and plenty to eat and drink. High-end vendors and a good sponsor experience complete the picture.

One thing Garden State and Monmouth now have in common is their manager, Tucker Ericson, an insurance executive and horse show judge who splits his time between Ocala, Fla., and Far Hills. He also manages the successful Country Heir shows in Kentucky.

“Tucker’s an excellent guy. I couldn’t be more thrilled,” said Tim Cleary, 61, who stepped down as Garden State’s manager after this year’s show. 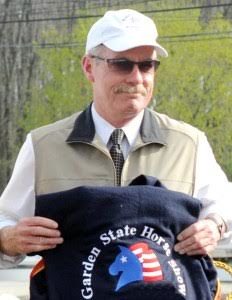 Garden State is run by the alumni of the Junior Essex Troop of Cavalry, which originally was based at its own farm in West Orange. The troop was open to boys between the ages of 10 and 18 who trained in the cavalry tradition. But after the farm was sold following the 1983 show, troop membership declined and finally, the organization for young people could not continue.

Even so, the former troopers were a tight-knit group who kept the show going, first at Chubb Park in Chester, before moving to Sussex in 1987 when Garden State outgrew the Morris County venue.

Recently, however, entry numbers dropped as the needs and desires of exhibitors changed with the times and more shows crowded the calendar.

“We were struggling. This year, we really worked hard to try and make ends meet,” said Tim. The former troopers who did much of that work also are getting older, and while they enjoyed their annual reunion at the show, the amount of effort it required was becoming daunting.  Concern arose that Garden State might not continue.

So Tim, who works as an announcer at the Monmouth show, believes the new approach for Garden State is the perfect fit and will insure that the show can go on.

“I think it’s awesome. I couldn’t be more thrilled about the whole thing. It’s the tradition of Troop locking up with the tradition of the Team,” explained Tim, an associate professor of equine studies at Centenary University in Hackettstown. 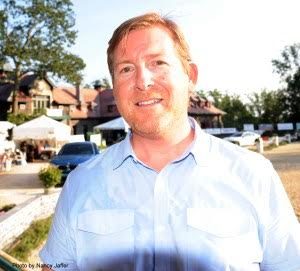 Tucker Ericson, manager of the Garden State and Monmouth at the Team shows. (Photo© 2018 by Nancy Jaffer)

Tim noted that having only one ring makes it “almost like an indoor.” The show is nine days (the first two days’ offerings are not recognized by the U.S. Equestrian Federation) so it can accommodate the wide range of classes Garden State always presented for all levels in multiple rings, but there also will be some editing to make sure every division presented makes sense.

“Trying to determine what the consumer wants is critical,” said Tucker.

Tucker, 49, bought the Monmouth show with his cousin, Michael Dowling, an assistant professor of equine studies at Centenary, where he also is a coach of the intercollegiate riding team. It provides a template for Garden State’s evolution.

“The guys from Junior Essex Troop have worked so hard for so many decades on creating a horse show that became a priority to many in New Jersey and surrounding states. At the same time, the industry has put such an emphasis on footing, hotels, restaurants and a special boutique experience,” Tucker observed.

The Somerset Hills where the foundation is located has many amenities close at hand. For instance, there are four high-end restaurants in the borough of Peapack and Gladstone, along with several smaller dining establishments that are a drive of three or four minutes from the showgrounds.

“What Monmouth at the Team has done has shown horse shows that a show like that can thrive. We certainly love Sussex County, but that (the fairgrounds) is such an overwhelming facility to try and get your arms around. Gladstone enables us to do something that’s achievable on the high end, so we can provide that experience an entire family would enjoy,” Tucker continued.

He views hospitality as “so critical” to enable even those who aren’t riders to have some fun. There are gifts for competitors who win first place in every class and the championships, all part of making “the entire experience something people look forward to and not just another run-of-the-mill horse show. Having the entire show focused on one ring creates an atmosphere where the spectators are really enjoying the sport again. That energy at the USET Foundation is hard to replace,” continued Tucker, who compared the concept to the Devon Horse show, which has a main ring and a smaller, ancillary ring often used for warm-up.

Although sponsors will have the opportunity to be involved with two shows at the same facility, Tucker noted Garden State will be “distinct and separate” from Monmouth at the Team. At the same time, Monmouth will be an experience “that we want to replicate, in some regard. I’m sure Garden State will create some of its own nuances” to keep it distinct and separate. That’s especially true since one show is in the spring and the other is in the summer, which means they won’t become redundant. Meanwhile, Tucker is hoping that Garden State will help bring some new people to Monmouth at the Team, and vice-versa. 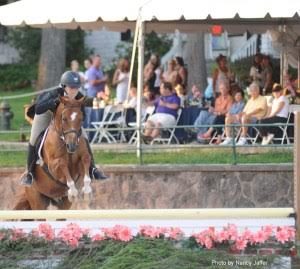 Guests in the VIP tent have a great view of the action at the U.S. Equestrian Team Foundation during Monmouth at the Team. (Photo© 2018 by Nancy Jaffer)

Another benefit, from Tucker’s viewpoint, “is that we get to promote the USET Foundation at the same time. So many kids growing up today don’t understand the roots of our sport and the mission of the foundation.  Every chance we get to promote that facility and help them raise money for our teams and games around the world, it’s  so critical to carrying on a tradition that is a whole exciting offshoot of bringing horses to the team (facility).”

Unlike Monmouth, where the highest rating is B, subject to USEF approval Garden State will continue to be rated AA for hunters during its seven recognized days. As usual, it also will have a show jumping grand prix with a purse of at least $25,000. Monmouth does not have a grand prix.

Tucker is hoping that by the time Monmouth at the Team gets under way, a sponsorship packet and tentative schedule for Garden State will be available so people can get an idea what the show will look like.

“Bringing in the community and sponsors will be critical,” Tucker pointed out.

Monmouth’s offerings are similar to last year, but an extra B-rated day has been added to give people another chance to earn points or ride in a division if they’ve been shut out of it earlier in the show because there were so many entries.

“It’s our way of being able to include everyone,” said Tucker.

News about Garden State’s move comes on the heels of word from the Mars Essex Horse Trials, held in June at Moorland Farm in Far Hills, that plans call for its new advanced division in 2019 to have its dressage and show jumping phases at the foundation, with cross-country remaining at Moorland.

The momentum is impressive since the ball got rolling three years ago with the Gladstone Gathering at the foundation. That cocktail party with a purpose  brought together more than 200 supporters of horse sport an d representatives of equestrian organizations.

It was a first step toward greater utilization of the foundation’s facility and increasing equestrian involvement in the Somerset Hills. The Gathering sparked the rebirth of the Essex Horse Trials, formerly presented on foundation property, which hadn’t been held for 19 years until it was reorganized in 2017. The Horse Trials are not an anomaly.

Newer facilities in Skillman, run by Princeton Show Jumping, and in Asbury, Warren County, where The Ridge has a series, also are adding life to the state’s show scene.

“It seems to me that the equestrian community in New Jersey is gaining strength again as far as high-end horse shows and people really trying to identify a strategy and a vision that is going to work,” said Tucker.

“Some of that certainly is because of the economy. It’s a lot easier to succeed in promoting a strong vision when the economy supports it. When the economy does dip again, if you’ve proven yourself as a standout and people are pickier with how they spend their dollars, they are going to go to those standout shows and make sure they are the ones that have legs and longevity. I’m always trying to think of ways to have the horse shows work together and share some synergy, whether it’s a vendor or an award, or ideas.”

“We’re giving trainers and exhibitors a reason to stay in New Jersey now. As long as we continue to do that, it’s going to help the area thrive and make people think twice before they’re willing to spend thousands of dollars to travel away, when they’ve got something special in their backyard.”