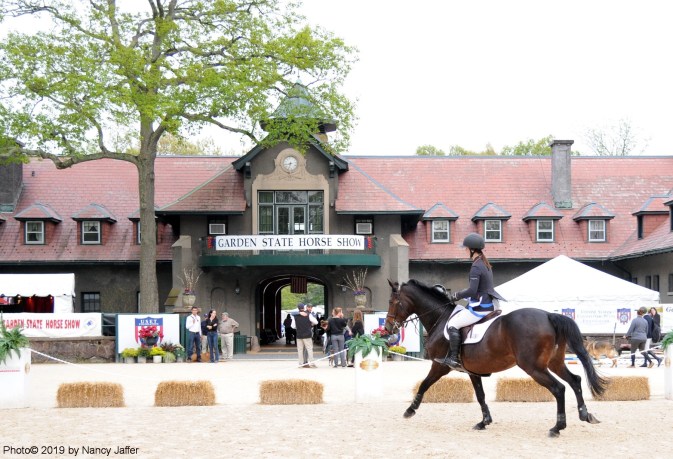 The Junior Essex Troop’s Garden State Horse Show got a makeover with its move this spring to the U.S. Equestrian Team Foundation headquarters in Gladstone, going to one ring from the eight it utilized in its former location at the Sussex County Fairgrounds.

It’s the same scenario as the Monmouth County Horse Show followed when it came to Gladstone from the Horse Park of New Jersey in 2016.  The common denominator of Garden State and Monmouth is manager Tucker Ericson, a respected judge, a sharp organizer and one heck of a bartender.

He’ll pitch in anywhere, but he realizes the importance of hospitality, so when we talked yesterday, he was mixing up Margaritas in the VIP tent.

Tucker noted that about 50 percent of the exhibitors who came to the nine-day show, which ends today, are different from those riding at Monmouth at the Team, which only has a B rating on several days, because Garden State has a double-A rating for hunters and level 4 jumpers that are highlighted by a $25,000 grand prix.

Many of those who came for Garden State were so enthused by the location that Tucker noted  the historic main barn already has been sold out for Monmouth at the Team in August. Garden State is “a nice complement” to the other show, and introduced people to the USET Foundation facility at the same time, Tucker observed.

“We have a lot of exhibitors who were waiting a year to see how successful this would be, if we could pull this off, and I think we’ll get a lot of those people back next year,” he commented..

“I think the trainers have been impressed that we can push through so many trips in a day in this ring, because we have no conflicts, we have posted orders and everyone cooperates.” While Garden State had 475 horses last year with the multiple rings, the show should be approaching that number in Gladstone as it wraps up this afternoon.

“There’s great energy with the entire show watching one ring that it keeps moving. It is challenging to keep everyone happy, but what was nice was a couple of exhibitors said their trainers give them more quality attention because they don’t have to run from ring to ring,” said Tucker.

“When any rider isn’t showing, they’re in hospitality cheering on their fellow teammates from their barn.The support from the sponsors has been tremendous, along with trainers rallying their barns to get hospitality,” Tucker pointed out.

“A one-ring horse show is very hard to break even, if not for the sponsors and the trainers supporting hospitality, then these shows can’t exist. It’s critical for that support to pull this off.” 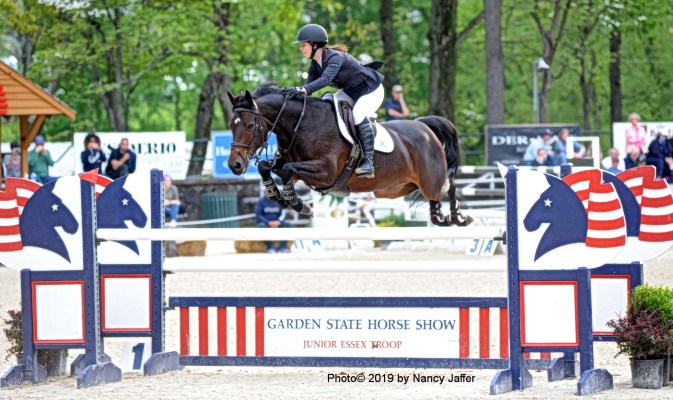 Yesterday afternoon’s feature was the $25,000 EquiJet Grand Prix, which drew 19 starters over the course laid out by Ohio designer Joseph Carnicom, with five coming back for the jump-off. Although there were several professionals in the class, the winner was a junior rider, 17-year-old Randolph High School senior Carley McInerney. Aboard Cortina 200 in her second grand prix, she was clocked in 42.006 by taking advantage of a tight rollback, just ahead of amateur rider Sima Morgello on Azur Van Overis Z (42.480).

Carley, who showed at Garden State when it was in Sussex, said about the show’s new identity, “I love this ring and the property is awesome.”

Of her 13-year-old Holsteiner, Carley noted, “She’s incredibly talented. I couldn’t ask for a better mare. She just tries her heart out every time and I’m so lucky to have her.”

It was the first grand prix for Sima’s mount. 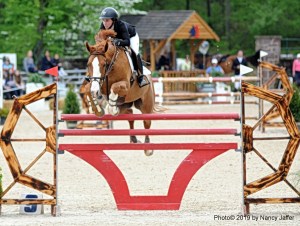 “I typically keep him in the medium amateurs to keep him confident and tonight was the first time I have ever asked for him to compete a course that size,” she said.

“It just felt right; he has produced fantastic results the last two weeks because he was also second, third, and fourth at the Longines Masters last week.”

“I thought the course was fantastic and riding at this facility is always such a pleasure,” she added. “I’ve started grooming for myself, so it was a busy day, but luckily for me it is close to home and it’s always a show I enjoy.”

Bastian Schroeder of EquiJet said he likes the new location for Garden State, which his company had also sponsored when it was in Sussex.

“I think this is a good move, because the setting is great, the footing is perfect. The venue deserves a good horse show,” he commented.

The Junior Essex Troop was a military-style organization for boys that had its own farm in West Orange. The boys took care of the horses and developed a camaraderie that has lasted for decades. Though the organization itself has long since disbanded, the bonds that troopers shared are unbreakable.

The show was a feature of the troop year. After the farm was sold in 1983, the show moved to Chubb Park in Chester and then to the Sussex fairgrounds in 1987, where it became New Jersey’s largest show.

It provides a reunion opportunity for the former troopers, who worked tirelessly for decades to stage it. But handling everything was getting harder as the men got older, and things are different with Tucker and his crew overseeing things.

The former troopers are “sitting outside the ring now,  relaxing, realizing they can actually enjoy their show  and take a deep breath and watch people having fun and seeing how the facility creates the event for them,” said Tucker.

“I’m thrilled we have a bunch of amazing people working with us. It’s been nothing but smooth. I think we needed to make this move for the prestige of the show,” said John.

“I think people like the panache of a boutique show where you’re not just a number.”

Allan Spina of Long Valley, who was a trooper from 1970 to 1979, said “I love the show here. The ambience is amazing and it’s setting the bar much higher than we used to in the past. I think it’s a much better experience for everyone.”

“It’s a different pace, a higher quality and it’s just wonderful. The footing here is just tremendous. It was time to make a change,” said Rodney Seelig, the show’s chairman.

“I think it was the right move at the right time. Tucker and the Team with all the troopers have done a great job.

Exhibitor Katy Merchant, 17, of Branchburg, has a special feeling for Garden State.

“I grew up competing at Garden State in Sussex, from a very young age. It was my favorite horse show because we’d stay in campers,” she reminisced.

While Katy said the show at the USET Foundation “It’s true to the feeling” she had in Sussex, “it’s much different and I think it’s really going to be successful. I loved it. To have the horses stay in this barn is such an honor. The elevated vibe of it is a good thing.”