An inside look at the lives of U.S. equestrian stars 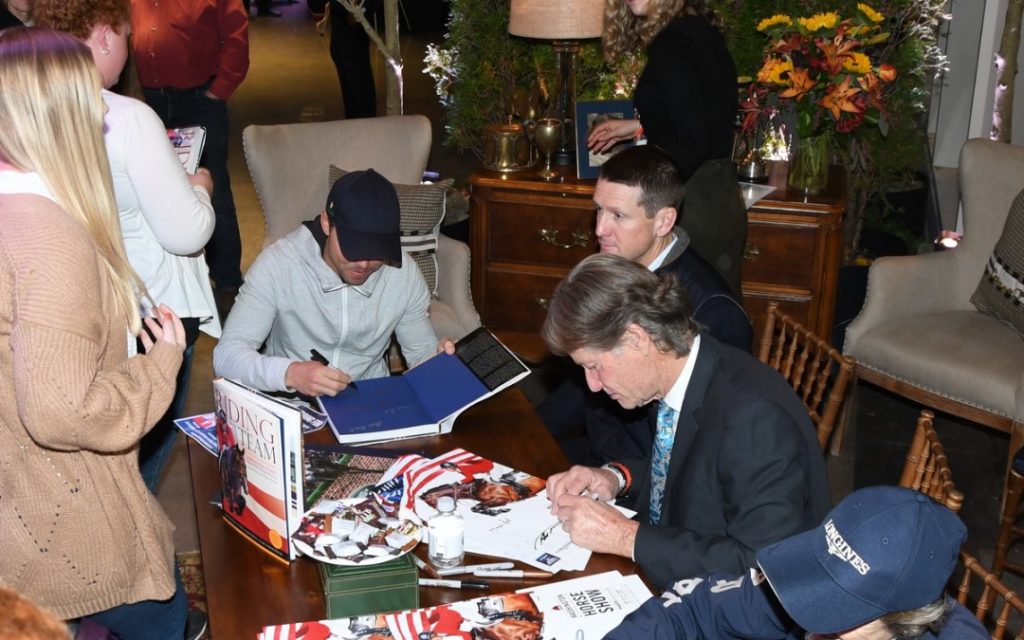 “Riding for the Team,” the new book from the U.S. Equestrian Team Foundation, made its formal debut at the Washington International Horse Show over the weekend.

There was a real buzz as people lined up on the concourse of the Capital One Arena for a book-signing session featuring U.S. team show jumpers Kent Farrington, McLain Ward, Margie Engle and coach Robert Ridland. Laura Kraut, who was judging a class at the time, earlier in the day autographed books to which the other signatures were added. All of these folks are, of course, featured in the book.

I edited “Riding for the Team” over the last two years (you may have wondered why I was so busy) and am thrilled to help tell the inside stories of medalists in eight disciplines: Show jumping, eventing, dressage, vaulting, driving, endurance, reining and para-dressage. What it took to get to the top is laid out in detail along the 292 pages of this volume published by Trafalgar Square. Although the course of the athletes’ careers was different, in each case they had the determination to overcome failure and discouragement, as well as a unique brand of persistence and aspiration in common.

This book is the third in a series. The first, “The USET Book of Riding” came out in 1976 under the guidance of the late Olympic gold medalist and USET chairman Bill Steinkraus. It marked the USET’s twenty-fifth anniversary and presented the history of the transition from Army teams to civilian equestrian squads in representing the country.

I edited the second book, “Riding for America,” published in 1990. At that time, the USET only dealt with four disciplines—show jumping, eventing, dressage and driving, so the great performers of the era between 1976 and 1990 were highlighted. For this book, 28 years later, we have expanded to include all the FEI (international) disciplines, and the people in it are those who made their mark after 1990.

I was fortunate in knowing many of those who appear in the book before I began talking with them about their stories, so that helped when deciding where to focus for their part in the volume. The themes for some were easy to decide. How could you write about Rich Fellers, for instance, and not zoom in on Flexible, the plucky little stallion who won the first FEI World Cup Show Jumping finals for the U.S. in 25 years, and then went to the London Olympics later in 2012.

Debbie McDonald talked about how the dressage scene has changed since she started out, after she had a bad fall while jumping and decided to switch disciplines. Four-in-hand driver Jimmy Fairclough spent 40 years working toward a team gold medal, and finally achieved his goal at last year’s FEI World Equestrian Games. Becky Hart started from scratch with a free horse and wound up as the only three-time endurance world champion. Gold medal vaulter Devon Maitozo explains why he stayed in his sport as an adult, when so many vaulters quit after their teens.

Robert and Margie give their signing hands a little break. (Photo by Lawrence J. Nagy

Eventer Derek di Grazia tells of his transition from rider to course designer, with an eye toward his gig laying out the cross-country route at the 2020 Tokyo Olympics. Vicki Garner-Sweigert relates what it was like to be a para-dressage pioneer and win gold at the 1996 Atlanta Paralympics, the first to offer equestrian sport.

With the Olympics coming up next summer, it’s interesting to gain insight on those who have had past successes at the Games, while reading about the candidates pointing toward 2020. They include dressage rider Laura Graves, eventer Boyd Martin and all the show jumpers who fans met in the autograph session, as they point toward Tokyo. Para rider Becca Hart, the first U.S. rider in her discipline to medal at the world championships, is looking at making the team in Japan for her fifth Paralympics.

Of course, there are great photos to illustrate the stories, and many pieces have photos from the athletes’ early days that you won’t have seen previously. The USET Foundation’s Sara Ike worked diligently to obtain and organize the photos, which was quite a task on its own.

Here is the link if you want to order the book. You can also go to the USET Foundation’s website, www.uset.org. Proceeds from sales of the book benefit the USET Foundation in its efforts to support athletes giving their all for our country in the Olympics, world championships and other major competitions around the globe.

Meanwhile, if you want to find out more about what went on at the Washington International, the only U.S. show in the heart of a major American city, click here for my story on Practical Horseman’s website.