Those attending renewed old acquaintances and made new friends, all with one thing in common — the love of horses and equestrian sports, with a wish that they continue to thrive and grow in the region. The event drew 250 guests, who heard Foundation President and CEO Tucker Johnson emphasize, “Without the support of individuals who share our passion for the sport and this facility, we can’t maintain the high standard, both here and most importantly, for our international athletes to go abroad and get winning.”

He noted the scenic area where the headquarters is located has extra significance, due to many residents’ enthusiasm for country sports. Johnson looks forward to the Foundation’s stable continuing to build on its formidable legacy by hosting more events, whether they are competitions, clinics or other educational opportunities. That is in addition to its main mission of raising funds to field, train and develop competitors who can represent the U.S. internationally in equestrian competition.

U.S. Equestrian Federation CEO Chris Welton, who made the trip from the USEF’s Kentucky base to attend, appreciates the importance of the Foundation and its landmark stable. 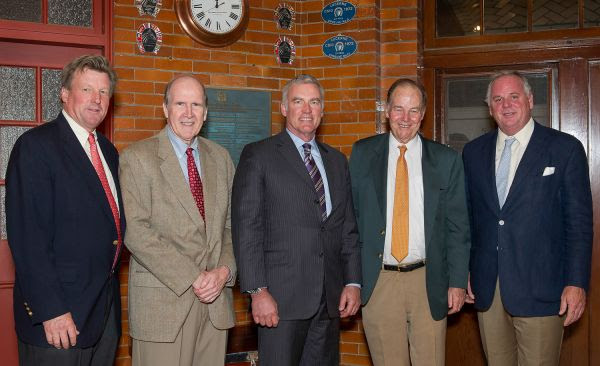 While there was talk during his predecessor’s tenure about moving all the USEF employees in Gladstone to Kentucky, Welton has no intention of continuing such a conversation.

“Why would you do that?” he asked as he addressed the guests, calling the stable “beautiful and fantastic.” He noted, “No matter how much money we had, this facility could not be replicated. You couldn’t build another Gladstone. As long as I have a say at the U.S. Equestrian Federation, Gladstone will be an integral part of what we do, in a lot of different ways.”

Later in the evening, he added, “We need to be firmly grounded in the traditions of the sport and the history of the sport. This is one of the great facilities in the U.S., and I think it would be big mistake not to take advantage of that.”

He emphasized it is important to “find the proper balance between progress, bringing young people in, and keeping these historical roots. This will be the right mix and the right message to help people appreciate our sport.”

The Gladstone Equestrian Association, which in recent years was involved only with driving, has been rejuvenated to “attract, promote and retain” equestrian activities in the Gladstone area under the leadership of president James C. Brady III, the grandson of James Cox Brady, who built the stable.

He hopes that by 2017, the structure’s 100th anniversary, the GEA actively will be supporting clinics, competitions and events across a number of disciplines that involve the community and local sites.

Johnson, a World Equestrian Games Four-in-Hand Driving medalist who grew up in nearby Tewksbury Township, is on the advisory board with former New Jersey governors Tom Kean and Christie Whitman, as well as USEF secretary/treasurer Chester Weber, a world championships driving multi-medalist, and Leonard Coleman, Jr., the last president of baseball’s National League and former chairman of the Hackensack Meadowlands Development Commission.

“What a great additional leg of support that will be for action here at the Gladstone facility and the mission of the Federation,” Johnson observed about the GEA.

“Having a little more of that action going on and having people in the community being aware of it and wanting to be part of it is something we look forward to,” continued Johnson, noting the GEA “will be an important step in that direction.”

After enjoying refreshments and mingling, guests were treated to a musical freestyle by Pan American Games Dressage team member Kimberly Herslow, who rode on new state-of-the-art footing in the arena behind the stable that has hosted many memorable performances over more than a half-century. The audience was transfixed, as many took photos and videos of the performance and afterwards, went over to meet Herslow’s affable mount, Donnermeyer.

Other organizations represented at the gathering included the Essex Foxhounds, the Somerset Hills Pony Club and Mane Stream, which offers therapeutic riding. These groups consider the USET Foundation facility as a lynchpin of one of the country’s loveliest equestrian areas, and view its presence in their midst with proprietary pride and affection.