Readying a historic stable for its next century

Hundreds of horses over 100 years had taken a toll on the unique U.S. Equestrian Team Foundation stable in Gladstone. While the 12-foot box stalls still were serviceably sound, they looked worn.

Shortcomings generally were evident just on close inspection, but even the most dedicated efforts to care for the stalls could only do so much.

Scrutiny revealed wood that was no longer shiny, some of which had rotted; stall floors showing their age, iconic pale green paint chipped off the metal bars and feed bins, walls that were marked and scratched.

“Any time you have a facility that is coming up on 100 years, there are clearly some capital improvements and maintenance that need to be done,” observed Bonnie Jenkins the foundation’s executive director. 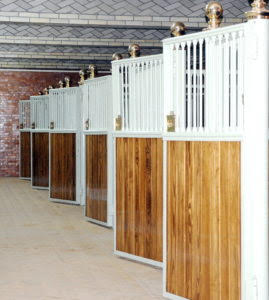 Stalls in the U.S. Equestrian Team Foundation stables are bright and shiny after a major refurbishment. (Photo copyright by Nancy Jaffer)

The moment had arrived to restore the grandeur of the most famous horse housing in the country. The cost is being borne by the foundation’s Gladstone Fund, an element of the Campaign for Excellence started in 2010, which is geared to preserving the facility at Hamilton Farm. Supporters of the foundation have contributed to insure the facility can be preserved in the style it deserves.

“It’s a great gift from great people who care,” said Cliff Cotter, the foundation’s director of facilities and the hands-on supervisor of the stall renovation project, which involves two levels of the building.

Former foundation chairman Jane Clark, for instance, has donated for projects such as footing for the arena where team training sessions and selection trials have been held, while a $1.5 million gift from the Hamill family last year meant work could get started on the stalls and ultimately other necessary jobs, such as replacing the original boiler and the slate roof with copper flashing.

The stable was built in 1916-17 by James Cox Brady, a New York financier who became master of an estate that spread across three counties. The structure of stucco over brick, reinforced with steel, was the largest and most lavish building of its kind in the country when it was constructed. It cost the then-princely sum of $250,000, about $5 million in today’s money after adjusting for inflation.

Its distinctive features include a second-floor trophy room with a glass ceiling, enabling those who gather there to see horses passing through the rotunda below; herringbone-pattern terrazzo brick floors and walls and ceilings of orange glazed tile.

After Brady’s death in 1927, the building was shut down. It eventually had several non-equestrian uses, including serving as a hospital for Merchant Marine seaman during World War II.

But in 1961, it started on the road to its current legendary status when Hamilton Farm was leased for use by the U.S. Equestrian Team, which funded, fielded and trained riders for international competition. It was a mission that had belonged to the Army until the cavalry was disbanded after World War II. 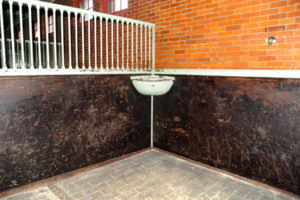 Prior to the re-do, lower level stalls had scratched walls, worn floors and chipped paint on feedbins and railings. (Photo copyright by Nancy Jaffer)

The USET elevated America’s profile on the international equestrian scene. Coaches such as Bertalan de Nemethy and Jack LeGoff worked with horses and riders who brought home the medals. Those who trained at Hamilton Farm included William Steinkraus, Frank Chapot, George Morris, Michael Page, Jimmy Wofford and dozens more who would go from Gladstone to glory at the Olympics, Pan American Games, world championships and the most important shows on the globe. Famous horses from several disciplines who have stayed in the stables, either long-term or as “guests,” include Snowbound, San Lucas, Grasshopper, Brentina, and so many others whose names are part of history.

The stall project started with the building’s lower level in December. Approximately 24 people were involved, plying a variety of trades at the site, from masonry and demolition to sandblasting steel so it could be primed and repainted.

Brass finials and other pieces, such as the rings used for tying horses in the stalls, had to be removed and shipped out for polishing, while missing items including brass plates from the stall locks were remade. Over the years, some of the valuable brass had been taken and likely sold, although the individually produced finials atop the posts flanking the stalls were spared because they are difficult to take off.

In fact, care had to be taken when the finials were re-positioned after being polished, since as Cliff noted, “each one sits on a post totally differently, because all the holes in the posts were hand-done when the building was constructed.

“Every time the guy moved from one post to the next, he could have been off a half-inch or quarter-inch, drilling the three holes that hold the finial on. So when you take a finial off, you have to make sure it goes back to the same place. Otherwise it’s a big puzzle to put them all back.” 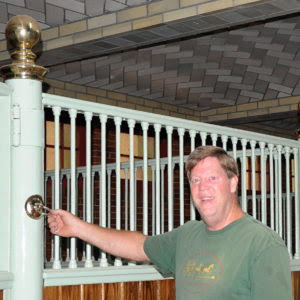 Construction supervisor Cliff Cotter shows off one of the brass rings used for tying horses. (Photo copyright by Nancy Jaffer)

Stall floors, originally tile with cork mixed in and laid above structural concrete, were chopped out with a jackhammer. Then metal mesh was laid down, with concrete poured on top of that. The original trough drains remain in each stall, but new pads were installed, coated with layers of a urethane finish. A final black painted layer includes an aggregate material to assure a good grip for horses walking on the surface.

The refurbishment involved some research.

“Probably the hardest part of the job was finding the wood to rebuild the stalls exactly the way they were when they were built,” Cliff recalled.

“I wasn’t satisfied with the options people were coming up with. I didn’t feel it would be the right fit for the building and also the longevity of the wood we needed.”

The southern yellow pine that duplicated the original wood was finally located in Alabama. At one point, a different type of wood, or perhaps even plastic wood, was considered.

“But we felt with the sealers we have today, able to seal the wood on all six sides, that will protect it longer than the original wood,” he explained.

Each board was individually milled, cut, planed, sanded and stained, then given two coats of polyurethane before it went into place on the 600-pound doors, from which the original wood had been removed. It took two hours per door to do the job, but everything was prepped and ready so it could be done in the optimum amount of time.

As Cliff looked into how to deal with what was needed for the brass fittings, John Bradshaw of Bradshaw Awards in Flemington, which engraves trophies for the foundation, pointed him toward the J.M. Caldwell Co. foundry in Westchester, Pa.

It took nearly four months from seeing the prototypes of missing items they made up until they produced samples that got the green light.

“You can’t really tell the difference between what was made 100 years ago and what (was) reproduced,” said Cliff, who has been with the foundation since 2006. He previously worked on large construction projects, such as dormitories at Yale University, and the golf course that shares Hamilton Farm with the foundation.

All the work on the stalls was thoughtful and painstaking.

“It’s the only way to do it here,” said Bonnie.

“To do it any other way would be not honoring the legacy we have and the wonderful facility we’ve been given.”

Other touches included replacing fluorescent lights with instant-on LED fixtures, re-opening windows that had been painted shut or warped, redoing brass ventilation grilles and putting a new surface on the ramps leading from the top floor to the lower level.

The stalls on the upper floor will be ready for their makeover in December. The cost will be approximately the same as the $275,000 spent on the lower level. Cliff thinks the upper level will go a little faster than the lower level, “because now we know the quirks and little things we have to do to make it work.”

He believes that if James Cox Brady came back today, he’d be pleased to see that from his viewpoint, the stables haven’t changed at all. 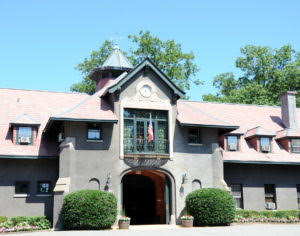 The USET Foundation stables, which have stood the test of time. (Photo copyright by Nancy Jaffer)

“This is a building that was built very, very well and we’re trying to take care of it to last another 100 years,” said Cliff. “It’s a labor of love to know that you’re working on something that’s going to last.”

The public is invited to visit the stables during the week, or when events are being held there. They include everything from Pony Club camp to dressage shows and the U.S. Equestrian Federation Talent Search.

More information is available at www. USET.org. Those who wish to contribute to the Gladstone Fund may do so through the website or by calling (908) 234-1251.

The foundation’s mission is stated as supporting, “the competition, trainining, coaching, travel and education needs of America’s elite and developing international High Performance horsea and athletes in partnershp with the U.S. Equestrian Federation.”

A triumphant preview of the Mars Inc. Essex Horse Trials