Monmouth is New Jersey’s oldest horse show, but at the same time, it is also the newest.

Next month, a re-invented version gets under way at the sixth venue in its history, and the second outside the county where it was founded 121 years ago.

Entries close Aug. 1 for the multi-ring fixture that most recently was presented at the Horse Park of New Jersey in Allentown. It has been repurposed for competition in a single, prestigious arena at the U.S. Equestrian Team Foundation headquarters in Gladstone, Somerset County.

Now called Monmouth at the Team, the show that runs Aug. 15-21 is an example of thinking out of the-box. It offers a wide range of classes, from a $10,000 mini-prix and a $10,000 hunter derby to $5,000 children’s/adult jumper sections, C-rated hunters and an outreach division at the lower level, which introduces riders to being part of a U.S. Equestrian Federation-recognized show without having to pay dues to the organization. 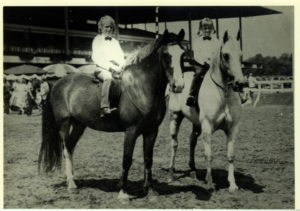 Tucker Ericson and his cousin, Michael Dowling, the Monmouth organizers, hope to increase its offerings and rating in succeeding years during a new chapter in its long and storied history.

When Sally Ike started competing at Monmouth in the early 1950s, it was held at Monmouth Park race track before moving to the track’s adjacent Wolf Hill property that was used for training.

“It was my first show. It was in the walk-trot and my pony’s name was Hard Times.”” recalled Sally, who went on to become a top three-day eventer.

Monmouth was very much of a family thing for Sally, since her father, Joseph, was president of the show and her aunt, Nancy Howell, the wife of a racehorse trainer, was the secretary.

“Everybody in the community was involved organizing it. It was an old-timey horse show, the judges were professional, but everybody on the committee was volunteers and pitched in to make things happen,” said Sally, now the USEF’s Gladstone-based managing director of education and licensed officials.

“Wolf Hill was an old breeding farm, so there must have been 100 or so stalls and we stayed in permanent stabling.”

She added, “I have very fond memories. Those were the days; I can remember when Bert (U.S. show jumping coach Bertalan de Nemethy) used to bring the team down, (William) Steinkraus and (Frank) Chapot. It was an iconic horse show.”

Judy Richter has her own set of Monmouth memories. She and her late sister, Carol Hofmann Thompson, grew up in New Jersey, so Monmouth was a must.

“We rode in it when it was at the racetrack,” said Judy, noting with a chuckle, “we were lucky to get around the course on our rescue horses. It exposed us to what was out there.”

As they progressed, so did the show, which blossomed to be a regular stop for such big names as Rodney Jenkins and Bernie Traurig. Carol, who went on to join the USET, was always a big winner there.

Judy has fond memories of how her late husband, Max Richter, went on to win a jumper class at Monmouth on a careful, fast mare named Rationed Love over Frank Chapot–just back from campaigning in Europe.

“It was a high point in our equestrian career,” said Judy. “That was like a miracle.”

Judy also judged at Monmouth during the Wolf Hill era, and stayed in “what they called the Reading Room, the most fabulous place with hot and cold running maids and a huge, long banister that we all would slide down.”

Things changed when Monmouth Park needed the space at Wolf Hill and the show had to move. It spent a year in Readington at the old Four Seasons Farm, then moved to East Freehold Park for decades before heading to the Horse Park in 2012.

“It brings a smile to my face that Michael and Tucker care enough about the show to make sure it doesn’t die,” said Sally.

“In an ideal world, would it have been nice to have stayed in Monmouth County? Sure. But this is such a special venue. I’m really looking forward to it. I’m going to hang out at the horse show.”

Social life was always a big part of Monmouth, and the show at the team is going after that aspect in a big way.

It’s all about hospitality, starting with a welcome tent to greet people and assist them, starting with ship-in day, Aug. 15, before the show gets under way, when there will be pizza and cocktails for all. In the days that follow, plans call for breakfast every morning, and light appetizers in the mid-afternoon followed by heavier appetizers from Flemington-based Chive and Thyme catering. There will be a variety of parties; one that is Mexican-themed, a barbeque, sustainable local New Jersey offerings, a mardi gras, a Kentucky Derby party out of season, and a brunch and Italian meal to send competitors home on the final day. Live music is scheduled for the last four days of the show, an eclectic mix of classical, jazz and pop/rock.

Tucker is grateful for community support from the Gladstone Equestrian Association and the revival of the Essex Horse Trials, and with that, the Far Hills Race Meeting. The show is partnering with Essex “to promote each other’s businesses,” with Mars Inc., the Open Road Auto Group and RWJ Barnabas Health sponsoring both competitions.

Precise Buildings will be donating $12,000-$15,000 of work annually toward a utility building for jumps and equipment storage. After that, it will begin on a judges/announcers pavilion with heat, air conditioning and a state-of-the-art sound system.

What’s been a challenge, Tucker said, is what to keep in the way of classes as the multi-ring approach is boiled down to one arena. Monmouth leased its Tuesday date from West Milford Equestrian Center to expand its offerings.

“The grass roots is really what this horse show is about,” said Tucker, who estimates between 300 and 400 horses will participate.

“All of the 2-foot through 3-foot divisions are people who don’t get to show in that arena and now will have the opportunity. The show kind of has everything, depending on what your need is,” he said.

From zone points to Marshall and Sterling points, schooling in the arena (which will host the USEF Talent Search in October) and jumpers, there’s something for everybody.

“Even though it’s not a typical A show, it affords more opportunity to the community that’s around it at that time of year,” said Tucker. He pointed out it’s the same week as the Pre-Green Hunter Finals and the International Hunter Derby in Kentucky.

“So the high-end A-rated hunters involved in those finals aren’t around anyway,” he pointed out.

“We felt strongly about getting the message out about what that facility means to our history and the future of our sport. I think we knew it would be a big draw. The exciting part is to see how the local businesses are thrilled to get involved because they are looking for outlets that bring the community together. They’re using it as an outlet to bring clients, get involve, and enjoy the sport. It seems like a win/win for everyone.”

For more information, go to http://www.monmouthattheteam.com

Readying a historic stable for its next century