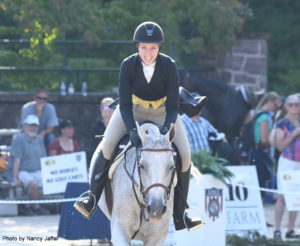 Christina Bond’s smile was mirrored by those on the faces of many other competitors at Monmouth at the Team. (Photo by Nancy Jaffer)

Monmouth at the Team may well be one of the friendliest shows you’ve ever attended—it seems as if a smile is the uniform of the day. “It’s like a neighborhood gathering, so we want to be open to everybody coming,” said Michael Dowling, the show’s co-organizer with Tucker Ericson.

Michael noted that after competing, some of the exhibitors go home to shower and change, then return to the U.S. Equestrian Team Foundation in Gladstone to watch, mingle and listen to the different bands that provide a toe-tapping soundtrack.
“We want people from outside the horse world too, local people who don’t have kids or people showing. We’re trying to embrace the community as a whole, not just the horse part. We want people to enjoy this place,” continued Michael, and the atmosphere is conducive to that.

No question is too silly to be answered politely, patience is everyone’s strong suit and there’s a general feeling of congeniality and fun. What was that word—fun? Yes, it’s a week-long horse show that’s more like a party, both in and out of the hospitality tent.

The show, New Jersey’s oldest, moved from its namesake county last year after Michael, who is a trainer, and Tucker, a horse show judge, bought it. The transition was seamless and it was named the New Jersey Horse Shows Association Show of the Year for 2016.

What’s the formula for this success?

“I think we keep doing what the people want,” said Tucker.

“They want an event, not a horse show. They want their family and friends to come and hang around and laugh and hear the music and drink great drinks and eat great food and watch their family members horse show in a venue that has a lot of history about our Olympians and our sport.” 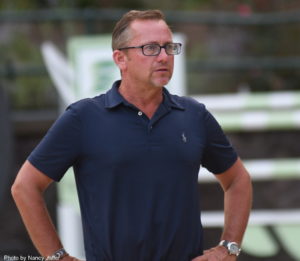 Michael Dowling, co-manager of Monmouth at the Team. (Photo by Nancy Jaffer)

The show, managed by Creigh Duncan, puts new life into the grounds of the foundation where U.S. teams once trained for the Olympics and other major competitions. Names such as Steinkraus, Chapot, De Nemethy, LeGoff, Wofford, Ridland and many more are part of the facility’s tradition in the big ring behind the landmark stable.

“It’s a piece of history, an unbelievable facility,” said Ricci Desiderio, trainer at Tranquillity Farm in nearby Chester.
He assessed the show this way: “I think people love it. It’s a slower pace, you’re only showing one ring.” Ricci and his wife, Stephanie, made the show a family affair with son Michael and daughter Alexandria busy in the arena.

Liz Durkin’s Durkin Firm in Livingston is a show sponsor, but the attorney is more involved with Monmouth at the Team than simply fulfilling the role of a backer.

“I brought my hunters and my jumpers. We emptied our barn,” said Liz, whose stable is in Warren County. 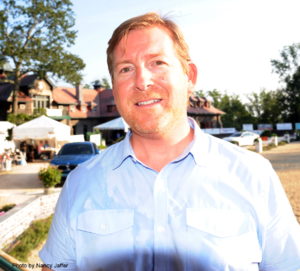 Tucker Ericson, co-manager of Monmouth at the Team. (Photo by Nancy Jaffer)

“We’re really just loving it. For those of us who are in the hunter/jumper world and are local, there’s nothing that’s not spectacular about this horse show,” she commented the other day.

“This show has been going since 7 o’clock and everyone is in a great mood 12 hours later. Everything is just perfectly done. There are so many horse shows that are so routine. There’s nothing special about them. Everything about this show is special, from the venue on up.”

Maxime Tyteca and Niels Haesen of Stal de Eyckenhoeve in Belgium brought one horse, Sirlando, across the Atlantic for the show. The Dutchbred and Maxime competed in the hunters for the first time, the day after the six-year-old former dressage horse and show jumper got out of quarantine.

The couple, business partners in selling horses and building a farm in Ocala with Tucker, appreciates the character of the show. As Niels pointed out, it’s quite different from the multi-ring extravaganzas in Wellington and Ocala.

“It’s only one ring and everyone’s together around the ring,” said Niels. “Everybody’s here.”

“I love having one ring that we can all sit and watch and enjoy,” said trainer B.J. Ehrhardt.

“The people all get to mingle, which we never get to do at horse shows, because we’re always too busy running around. I think they do a fabulous job.” 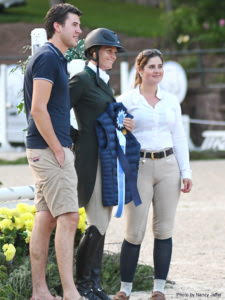 Niels Haesen and Maxime Tyteca present the award for the Round of the Day to Jazz Johnson Merton. The award is sponsored by Stal de Eyckenhoeve. (Photo by Nancy Jaffer)

There are those who have suggested that the show could hold extra classes in the indoor ring, or in a ring in the North Field, but Tucker’s answer is short and sweet.

“Oh no. It’s all about this arena and the energy around this ring. We’ve got an amazing staff,” said Tucker, noting they have handled as many as 400 trips over fences in a day. Everyone contributes to the effort.

“Trainers and exhibitors have risen to the occasion. We have put together an amazing group of sponsors. The support is outstanding. They are trying to help us make this work,” continued Tucker, pointing out that the economics of a one-ring horse show are challenging, compared to a multi-ring show.

The good feelings start with the parking people. Telling showgoers where to park is a thankless job—everyone wants to be in the very limited VIP spaces or 10 steps from the ring—but Linda and John Ericson (Tucker’s parents) do it with a smile.
John is a former Hunterdon County school superintendent. His wife, who was an assistant to an attorney at an insurance company, said cheerfully, “I never thought I’d have parking on my resume.

Tucker pitches in wherever he’s needed, too, often tending bar in the hospitality tent that stretches along one side of the ring.

The seven-day show proves that if you present a special product, it’s possible to attract exhibitors without extravagant heaps of prize money or the ultimate in U.S. Equestrian Federation ratings. Its highest rating is B, and the jumpers are Level 3.

The biggest purses are $10,000 each for the Sunday Aug. 20 mini-prix and the Bobcat Hunter Derby that was held Thursday, the one day of the show that is not recognized by the USEF. The Derby attracted 99 entries at a time when other shows are struggling to fill their classes, and the beautifully turned-out horses were top-class. Despite the feeling of informality that pervades Monmouth at the Team, this is no backyard show.

Jazz Johnson Merton, joint master of the Essex Foxhounds that are based just down the road from the foundation grounds, topped both rounds of the Bobcat Derby to win with Joe Cool, a lovely gray warmblood owned by her daughter, Willa. At age 12, Willa is a little small for the stately Joe, so mom got to ride him in the derby.

This is her first year competing at the show, but since she lives in Pottersville only a few miles away, “I was very pleased to be here this year. It’s in my backyard and such a lovely venue. I hope to see more competitions here again.”

Monmouth was Jazz’s prep for the Hampton Classic, where she will be riding Joe in the 3-3 hunters.

On Saturday, Aug. 26, she’ll be riding other horses in the Essex Foxhounds’ hunter trials at the foundation, so Monmouth was a good prep for that too.

While she hasn’t hunted Joe yet, “some of our show horses do foxhunt. All of the equestrian sports are so crucial in keeping the land open and keeping the countryside so beautiful in this area.”

Conservation actually was the theme of the Bobcat Derby. It was sponsored by the Nature Conservancy which wants to build “Bobcat Alley” for New Jersey’s last remaining wild cats. To survive, the endangered species needs land to roam. So the conservancy is trying to connect preserved land between the Appalachians and the Highland section of the state. The wildlife corridor will provide space for the animals to hunt, roam and increase their numbers.

In keeping with that mission, the Conservancy gave away headbands with tufted (fake) bobcat ears. They were the accessory to have. Some competitors even wore the ears on their helmets as they went over the fences. 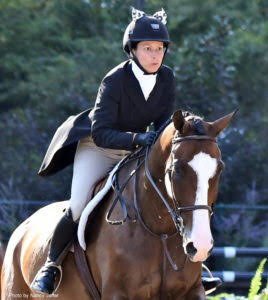 Jennifer Petrisko shows off her bobcat ears during her round with Sri. (Photo by Nancy Jaffer)

I was interested in finding out why the conservancy wanted to have a sponsorship at the show.

“We look for people to help us out,” explained philanthropy assistant Jeff Burian.

“The show has a large crowd so it gets the word out, and that’s the primary thing.”

Mary Conte, who does marketing for the conservancy and came up with the headband concept, notes that the conservancy is located a few miles from the foundation in Chester.

“This is an opportunity for us to build awareness of the good works we are doing in our community,” she noted, detailing why the
organization is involved with Monmouth at the Team.

“A lot of people don’t know who the Nature Conservancy is and don’t know we’re working right here in New Jersey to help wildlife and people and nature. So we thought this was a great opportunity to meet people in our community.” 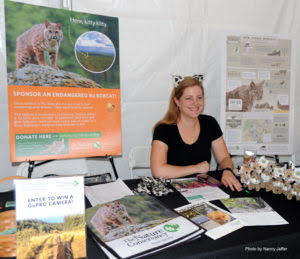 Mary Conti at the Nature Conservancy table in the hospitality tent. (Photo by Nancy Jaffer)

Monmouth at the Team is a refreshing fixture, proving what can be done when people who have both vision and expertise work hard and enlist like-minded folks to help them.

I have a habit of making suggestions, for what they’re worth, to show managers about what I think they could do to improve their events. But there wasn’t a suggestion I could make to Michael and Tucker–they did it all, and they did it right.

I look forward to the 2018 edition of Monmouth at the Team, and I know there’s a legion of showgoers who feel the same. If you have time, drop by today for the last day of the show. Admission is free.