Two of the biggest names in equitation headlined the weekend’s Platinum Performance/USEF Show Jumping Talent Search Finals East, with Taylor St. Jacques (a star at Devon this year) leading the standings after three phases, only to drop to second in the final rankings after 2015 ASPCA Maclay winner McKayla Langmeier showed her prowess once again.

The two days of competition at the U.S. Equestrian Team Foundation in Gladstone, N.J., ended with the special format of the Final Four, in which the top candidates after three phases (flat, gymnastics and a 12-obstacle course) rode their own horses over an eight-fence route, then took each of the other three participants’ mounts around it as well.

The Final Four is a real equalizer. For instance, while McKayla has had her mount, Skyfall, for five years, Taylor Griffiths, who finished third, had only met her ride, Caracas, last Tuesday. On the other hand, that big gray carried Halie Robinson to the West Coast Talent Search title last month, so he definitely had the right stuff. 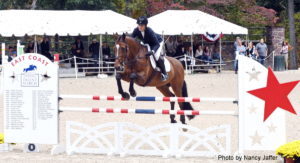 No one was perfect in the Final Four. McKayla had a rail with Caracas and also a cross-canter mishap on a turn, but Taylor knocked down the second element of a wall-to-oxer double. That counted strongly against her because it happened on her own mount, the fabulous Charisma, who won the Grappa award as Best Horse in the final. Meanwhile, in the plus column for McKayla was the way she rode the first line in a neat nine strides, rather than a scrambling eight.

McLain Ward, who judged the class with fellow grand prix show jumper Jimmy Torano, called the Final Four concept “phenomenal,” citing the way it worked out at this championship. (Interestingly, the Final Four horse-switching for the World Show Jumping Championships, after which the Talent Search segment was modeled, has been dropped. It seems show jumpers are just too expensive these days to be swapped off.)

But it still works at the Talent Search. 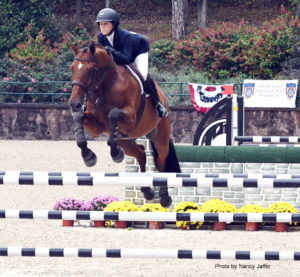 “For me, it was exciting right to the very end. I think that’s the beauty of it; it changes, there’s ebbs and flows, it’s not one mistake and you’re out,” McLain said.

“Riders have a chance to rebound and fight back. Taylor fought back and made it very close. There was not a lot of room for McKayla to make a mistake, she had a beautiful last round and got the job done.”
McKayla was surprised to find out she had won. While she and Taylor St. Jacques were waiting for the announcement, neither was sure what the outcome would be.

The Talent Search process is an educational weekend that serves riders on the rise who apply themselves. Taylor Griffiths is only 14; Abigail Brayman, who was fourth, is still polishing her resume. Nina Columbia used it to get a foothold on improving her position on the Big Eq scene. Nina, 16, of Kinnelon, was the top-placing New Jersey competitor in the field of 52, finishing eighth.

McLain said of Nina, “The girl was close all week, we thought the world of her. She had a nice way with the horse, a nice attitude, nice feeling.”

Nina got introduced to horses by the time she was three at the Smoke Rise Riding Club, where her grandmother, Barbara Columbia, also rode. Barbara was on hand to watch her granddaughter, along with Nina’s father, John Columbia, who drives her to lessons three times a week at Beacon Hill in Monmouth County, a long way from the family’s home in northern Morris County.

After riding with Robert Beck in Long Valley, Nina started taking lessons with Stacia Madden at Beacon Hill a year ago.
“She’s provided me with the most amazing opportunities,” said Nina, noting she also found her finals horse, Checkland.

“He’s the most amazing partner, he saves me and he’s awesome,” said Nina, a junior at Kinnelon High School.
She made her Talent Search debut in 2016, but this time it was a different story. 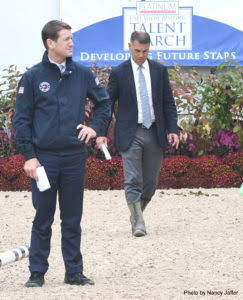 Talent Search judges McLain Ward and Jimmy Torano work on laying out the final course for the class. (Photo copyright 2017 by Nancy Jaffer)

“I’m taking the lessons I learned last year and applying them to this year,” said Nina. While it can be challenging to take part among a legion of top riders, she noted, “I’ve been really working hard. I’ve been thinking a lot. Stacia taught me to think, to plan, to take a breath. That’s what I’ve been doing, and it’s paid off.”

“Any time you’re competing against top riders, it brings your level of riding up to the next level,” Stacia said about Nina’s performance.

She takes pride in her student’s improvement.

“Everything is just starting to come together at the end of the year,” commented Stacia. 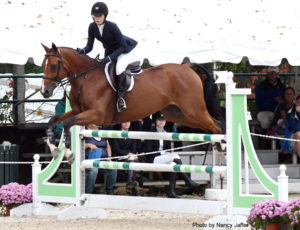 Nina is hoping to ride NCAA at college, and is interested in pursuing the horse business professionally, but first, she’s focusing on the the Medal and Maclay finals this autumn.