The horses who were part of the U.S. Equestrian Federation’s developing dressage training  and evaluation session in Gladstone someday may be on an American team at a major championship—or they may never rise to that level.

But the help their riders got during the October sessions from U.S. Developing Dressage Coach Debbie McDonald and other key professionals was geared to giving them a leg up, not only with their current mounts, but also with the horses they may ride and train in the future. 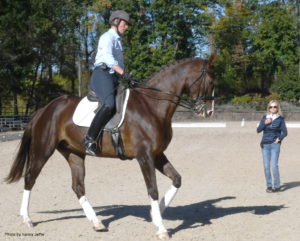 Developing dressage coach Debbie McDonald instructing Allison Kavey, who rode Cacharel in the clinic, said, “It was a great opportunity for this horse and me to get this level of instruction before we went to Florida.” (Photo by Nancy Jaffer)

It was, as always, fascinating to watch Debbie work with the riders in her gentle but effective way, counseling here on improving a pirouette canter along the way to making a pirouette better, or there, on improving the contact through positioning, rather than pushing the horse into it.

The four-day workshop at U.S. Equestrian Team Foundation headquarters, where so many Olympians have trained over the decades, offered an important step for those aspiring to represent their country someday. The program, which also runs in other regions, is part of a revamped effort to link the elite horse/rider combinations competing at the Olympics, World Equestrian Games, World Cup finals and Pan American Games with those on the rise at lower levels. The greatest pairings cannot go on forever, and the U.S. needs a pipeline for cultivating talent able to proceed through the ranks.

Emily Donaldson of Pennsylvania was thrilled she and her two horses could participate. One is a 12-year-old who just started Prix St. Georges/I-1. The other is an eight-year-old still working on flying changes. Being involved with the clinic made a difference for her and her mounts.

“It’s just been amazing. You think, `If I could do this every week, gosh, what would happen with my training?’ You have to be a sponge and soak every bit of it in and sort of run with it when you go home,” said Emily, who is fighting breast cancer and undergoing chemotherapy, but pushed hard to make sure she could take advantage of the clinic.

“The USEF is so generous. It’s amazing what they have provided us with. My goal is to be a team rider.  As a pro, it’s hard to find time for yourself. Just being here…it’s been amazing.”

Debbie remembers when developing programs often were under-funded, since money originally allotted “would get pulled because it was an Olympic or a WEG (World Equestrian Games) year.” While that was “totally understandable” as Debbie said, it also was frustrating. 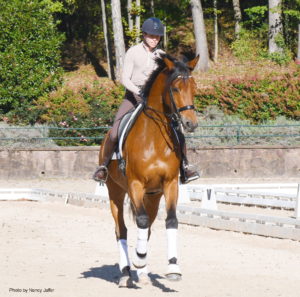 Emily Donaldson and Audi honed their skills during the clinic. (Photo by Nancy Jaffer)

But the game changed when the program got support from USET Foundation Trustee Akiko Yamazaki (best known as the sponsor of Steffen Peters) and the Red Husky Foundation. In addition, Elizabeth Juliano has contributed as the founding sponsor of a physiotherapy initiative, represented by Andy Thomas in Gladstone. The program also included a session with a sports psychologist, as well as evaluation of dressage tests by Olympian and judge Charlotte Bredahl.

“Every year I do this,” said Debbie, “I get a bigger vision of where this could go. I might still want to tweak it a little bit, but this year, I feel so much more engaged with the riders and I feel like I’m helping them set goals and future plans.”

Riders came from as far away as Iowa and Illinois to take advantage of the program. Not every region has an abundance of resources for dressage, so that makes the program doubly important.

“Finding some good eyes on the ground is difficult in some of these places that people live,” said Debbie, who also watched how the participants’ own trainers worked with them.

Former U.S. dressage chef d’equipe Jessica Ransehousen, who rode on Olympic teams during this country’s dawn of dressage consciousness, was on hand with Emily, who is her student. When Jessica was leading the U.S. squads, there was no program comparable to this, and it was hard for many people to find a pathway to the top.

Jessica appreciates the availability of such former top competitors as Debbie and Charlotte.

“I think what’s going to happen is these people (the riders in the developing program) are going to talk to their friends who are then going to want to come into a program like this. It’s going to get bigger and bigger,” Jessica said. 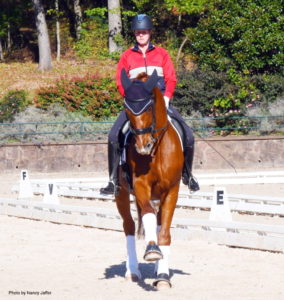 “We want to encourage those riders who have already been to the top to put some time into it,” she continued, discussing the way veterans can reach out to those aspiring to achieve a higher level of performance.

Jessica noted that while she can tell Emily something in her weekly lessons, “Debbie can say it in a little bit of a different way, and suddenly it clicks.”

Missy Fladland, who is based in Iowa, called the clinic “top notch.”

“The experience has been great. We’re meeting not only other professionals that we can connect and network with. Debbie and Charlotte both have an ability to fine-tune the little things in the rider and horse to make it look seamless,” she commented.

“Where the program is going to go for the U.S. and the future of dressage is just unstoppable. For me, this experience has been amazing, unbelievable.”

The revamped program includes evaluation as well as training. As the USEF’s managing director for dressage, Hallye Griffin explained it, after the session, some people may be selected for membership that will enable them to obtain grants. In the past, athletes applied for grants, but there wasn’t a lot of individual follow-up with those who were chosen.

Now, after they have been selected, the areas where they need more help are identified and they are put in touch with experts in those fields, whether it’s physiotherapy, statistical analysis or others. The process also calls for a six- month review to determine whether they have reached the targets set for them, perhaps moving up a level or getting a certain score.

The emerging athlete component is part of the same initiative that offers a clear road for getting to the top.

“The aim of a pathway is to make sure that there is education, coaching and competition support at every level, and a clear vision of what it takes to get to the next step, if that’s what people want to do,” said USEF Director of Sport Will Connell.

“You plant a tree and you watch it grow. This is about finding people that are starting out in their international career and helping them grow.”