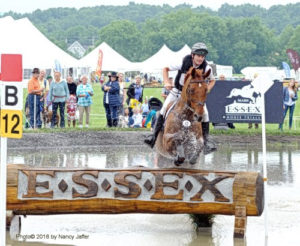 After a brilliant return to the eventing calendar in 2017 following a 19-year absence, the Mars Essex Horse Trials had a hard act to follow for 2018. But today, more big names competing in the Preliminary division and a promise to add the Advanced division next year (more on that tomorrow) demonstrated this beloved fixture isn’t just getting older, it’s getting better.

The new Preliminary Essex section, with $20,000 in prize money, offered a greater challenge cross-country than the Open Preliminary and Preliminary Rider divisions.

“I added the Essex Division to give more excitement to the game,” said cross-country course designer Morgan Rowsell, who co-chairs Essex with Ralph Jones. 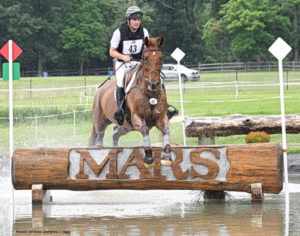 Ryan Wood has great hopes for his Essex winner, Ruby, at the higher levels. (Photo© 2018 by Lawrence J. Nagy)

The concept worked. Buck Davidson was the marquee rider who appeared last year at Moorland Farm in Far Hills, taking first through fourth places in prelim. But this time, there were a lot more recognizable faces, from  Ryan Wood, who earned the $8,000 winner’s share of the Preliminary Essex purse, to second-place Michael Walton (he also is known as a show jumper);  Buck, of course; Sally Cousins, Madeline Blackman, Courtney Cooper, Sara Kozumplik Murphy and a few more of whom you may have heard.

The cross-country course was inviting, while offering exactly the right amount of questions to make horses and riders really pay attention.

“It was a very strong track. I walked it this morning and thought there were enough questions and terrain and very well-presented jumps,” said Ryan.

“By the end of it, I thought it was going to be a good round if you went clear and under time. It proved it to be just that. There were a couple of rider falls and multiple run-outs and I was lucky enough to be on a very experienced horse, Ruby, who finished on her dressage score of 27. So she led from start to finish,” noted the Australian citizen, who is based at Phillip Dutton’s farm in West Grove Pa. 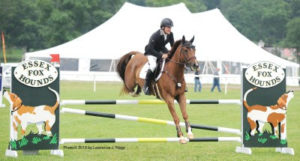 Michael Walton jumped clean in stadium with Brave New World to move up from sixth to second in the Preliminary Essex division. (Photo © 2018 by Lawrence J. Nagy)

Nine horses, or less than a third of the 30 who finished the division, got around without time penalties. They found themselves with another challenge when facing Chris Barnard’s show jumping route later in the day in front of a cocktail party held in the Hoopstick Club, named after the Bedminster farm where Roger Haller, his family and friends first staged Essex in 1968.

“It was interesting to see the rails that were coming down,” said Ryan, who was tied for eighth on another mount, Ben Nevis, and 11th aboard Chusinmyconfession.

“I was a victim of a rail on each of my other horses,” noted Ryan, while praising the designer’s ability.

“Jump one looked like the softest jump on the course, a little bit of a rampy oxer, but it came down more than any other jump on the track. I thought the treble (triple) looked tough and it jumped better than any other combination. I was lucky enough to have two practices at it before piloting Ruby around.”

Not everyone was as lucky.  Take Cole Horn, who had been standing second on Cooley Sligo after cross country. He dropped three rails to finish 13th.

Ruby, an 8-year-old Oldenburg mare by Royal Prince, is a New Jersey-bred from Summit Sporthorses, Ilona English’s farm in Ringoes. The clever chestnut is a half-sister to Powell, another Summit horse on whom Ryan won the Jersey Fresh International CCI 3-star in 2016. 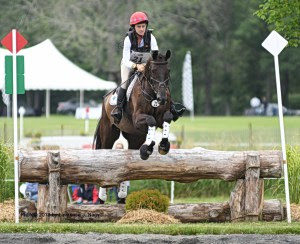 Ryan hadn’t been to Essex previously, but he’ll return.

“I think it’s phenomenal. I can’t wait to come back. I will be promoting it to everyone in Pennsylvania,” he said.

Another first-timer from Pennsylvania, Kaitlin Clasing, won the Open Preliminary division aboard Warren LVS on his dressage score of 29.80. She came from second place with her clean round to pass overnight leader Elizabeth Bortuzzo on Belongs to Teuffer, who dropped three rails.

A professional trainer who is married to another trainer, Daniel Clasing, Kaitlin had hoped each of them could win their division at the same event for the first time. But Daniel’s two rails down iwth Captivate in the Preliminary Essex division dropped him from a tie for fourth to 10th place, so that dream has to live another day. “We keep waiting for that weekend to happen,” Kaitlin said.

She has been working with Warren for the last two years, since he was four. Kaitlin was particularly pleased with his show jumping, since she noted he thought he had worked pretty hard on cross-country.

The Preliminary Rider division went to Juliana Hutchings-Sebring of Fair Hill, Md. It was her second victory in a row with Welbourne, who also won at Plantation Field. She got the Dutch warmblood two years ago in a trade.

He had come to her to be sold, because he was unsuitable for his older rider. But the sellers wanted a quieter mount and found it in her barn’s best lesson horse. Juliana wasn’t sure she should give up that patient paragon. 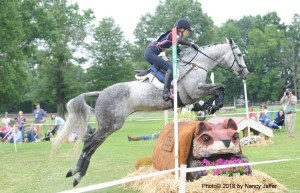 Juliana Hutchings-Sebring and Welbourne earned their second Preliminary Rider division title this month with their Essex victory. Note the neat fox fence in honor of the Essex Foxhounds. (Photo© 2018 by Nancy Jaffer)

“I was like, `An 8-year-old Dutch warmblood or a 12-year-old school horse I got for free who had arthritis but was a good horse and serviceably sound?’ It was funny, I really debated whether or not to take this horse for free. I’m obviously glad I did.”

She noted, however, “He’s a tricky horse, because he’s very spooky. This was the first event where he didn’t look at anything in cross-country or stadium.”

She was the only rider in her division who made the time on cross-country, moving her up from sixth after dressage, and her flawless stadium round kept her on top.

As a Fair Hill resident, her ambition long has been to ride in the Fair Hill International, and  she hopes to compete in the 2-star there this autumn.

The Mars Essex Horse Trials keeps moving ahead in style