The Mars Essex Horse Trials keeps moving ahead in style

The Mars Essex Horse Trials, which finished the second year of its re-emergence today, will be making a big jump forward next year. 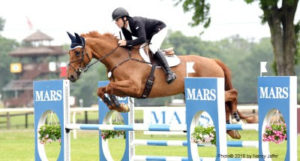 Not only is it ready to host an Advanced division (Preliminary was the highest level offered this year and in 2017), it plans to supplement its location at Moorland Farm in Far Hills with a side-trip to the U.S. Equestrian Team Foundation headquarters in Gladstone, where Essex was held until lack of cross-country space at the foundation site led to its termination after the 1998 edition.

The Advanced section would have its dressage and show jumping Thursday and Friday at the Foundation, where the historic arena has top-flight, up-to-date artificial footing. The Advanced entries would return to Moorland Saturday for cross-country, but all the other divisions will do their entire competition at Moorland, where the surface is turf for each segment. That concept would double the length of Essex, which has only been held on the weekend for the past two years.

Guy Torsilieri, an Essex board member and a key player in bringing Essex back to the scene in 2017 after a 19-year absence, noted Essex had permission to do Advanced for 2018, but passed.

“We chose not to do it this year because we’re still growing and working out the kinks as we re-invigorate Essex,” he said.

“We could do the total Advanced package here (at Moorland), but the turf and footing becomes questionable for the show jumping and dressage if we get weather conditions. Turf is the best—until it isn’t; until you get three inches of rain the night before, like we did last year and our dressage fields were flooded.”

The solution this year involved moving dressage away from the boggy area where it was held in 2017, and prime weather meant the show jumping arena was perfect. But the climate doesn’t always cooperate. 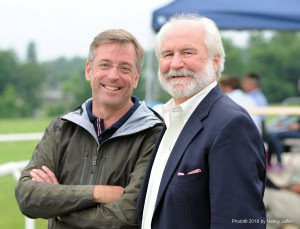 Jim Wolf and Guy Torsilieri, members of the Mars Essex Horse Trials board.

“The big story is tying in the traditional home of the Essex Horse Trials with its modern home. It’s gone full circle,” said Jim, who is a member of the Essex board.

Putting the historic foundation facility in the picture adds cachet to the event.

“I always say about Gladstone, when you walk into that stable, the walls talk, all those people who have been there, the history, you can’t replicate that anywhere else in the country,” Jim commented.

“I look at those stables and think about the famous horses that have been there that represented this country. For a rider to ride at a horse trials and be able to have their horse in the same stall as some of those horses is an amazing experience.”

This need to schedule Advanced dressage and show jumping at Gladstone raises a question for Guy about when he should put in a permanent ring with synthetic footing at Moorland, site of the Far Hills Race Meeting each October. He isn’t ready to do that yet, so Gladstone offers a perfect solution.

Asked to sum up where he thinks Essex is at the moment, Ralph said “This is all going according to plan.” He was pleased that the weather cooperated over the weekend (unlike what was predicted) and more than 2,500 people came out on the second day, when a car show was among the activities featured.

Putting everything together “really is a balancing act,” observed Ralph. 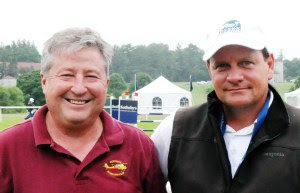 “You want to hold a very good equestrian competition. On the other hand, you want to make it a show, a country weekend and a family weekend for the community. The people here at Moorland Farm are dedicated to that. Putting on a good show is your best marketing. In the end, it’s really word of mouth that will bring this fixture back to the magic it was, the old Essex. And that’s really our goal, to bring it back.”

Essex is run for the benefit of the Greater Newark Life Camp in Pottersville, where approximately 300 Newark area youth each summer spend time learning about the environment and otherwise stretching their talent and imagination.

More than 130 volunteers have enabled Essex to flourish. Without them, Ralph noted, “we wouldn’t be able to do it.”

The Preliminary Essex Division, offering $20,000 in prize money, was held on Saturday (click on this link to read the story), but there was plenty of action on Sunday for the Training, Novice and Beginner novice levels.