Monmouth at the Team has a special niche 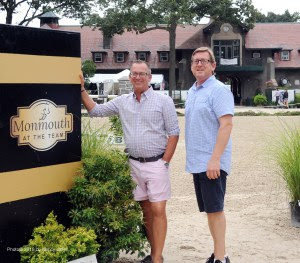 While a number of shows in its region have been scratching for participants this summer, Monmouth at the Team is so well-attended that part of the mandate for next year is figuring out a way to limit entries for certain competitions.

The show, with an eight-day run through Monday Aug. 20 at the historic U.S. Equestrian Team Foundation facility in Gladstone, has an appeal that is more than just location, location, location. It’s also a well-run show, owned by insurance executive Tucker Ericson and his cousin, professional horseman Michael Dowling, who has a stable nearby and is a coach of the Centenary University equestrian team.

“Our objective is to develop this and not grow it into something that’s about numbers,” said Michael. He and Tucker bought New Jersey’s oldest horse show three years ago and moved it from Monmouth County to Somerset County, giving it a new and more exciting identity.

“It’s interesting, because I know some of the (other) shows’ entries have been down,” Michael observed. Meanwhile, he said, “we are struggling with getting everybody in the ring and out, and not letting it get too big. We’re always looking at how can we do this a little bit better each year?” 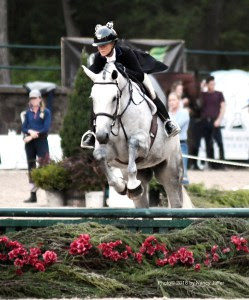 B.J. Ehrhardt wore her bobcat ears as she won the 3-foot section of the Bobcat Derby with Micah 7:7. (Photo©2018 by Nancy Jaffer)

There are no ring lights at the facility, which means some days, there’s a race to conclude everything before sunset. The $10,000 Bobcat Derby, which drew 59 entries in its 2-foot, 2-6 section and 35 in the separately pinned 3-foot section, for instance, wrapped up just as twilight was falling.

“The biggest thing we have to take into consideration the limitations we have of the ring,” noted Michael. This is basically a one-ring show, though occasionally something is held in the indoor arena.

The atmosphere is reminiscent of an A-rated competition because of the venue and the hospitality, but the show’s highest-rated days are B, and some days are unrecognized by the U.S. Equestrian Federation. It presents an opportunity for those at the lower levels of the sport to be able to participate in a prestige fixture.

The last time Sima Morgello rode at the foundation grounds was in her equitation days at the Platinum Performance/U.S. Equestrian Federation Show Jumping Talent Search Finals East. This was the 22-year-old New York University graduate’s first visit to Monmouth at the Team and she loved it—an emotion heightened by her victory on Orientales in the $10,000 Mini-Prix sponsored by Horseflight.

“It was fantastic. It’s a very special horse show. It’s very inspiring for people to see the history of the sport. They’re at a top, top facility which is always a pleasure,” she said.

“The divisions are very welcoming to riders at all the levels. The horse show really did think about making sure everybody had an opportunity to show themselves to the best of their abilities.” 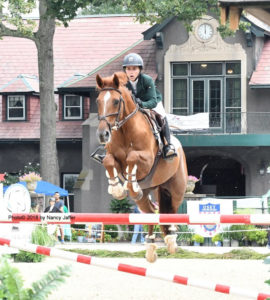 “Most of the people who come back are people who are relatively local,” pointed out Michael. “We are thrilled because it’s an awesome atmosphere.

Noting, “the judges are impressed by the quality of horses coming through the ring,” he commented, “it’s really fulfilling our objectives and what we want this to develop into. We have to fine-tune some things and make sure we’re giving back to the people who sponsor, and involving more of the local community, not just the horse people, but the local merchants and restaurants and trying to increase the entertainment aspect and atmosphere.”

Tucker said having a single ring enables the community to join together and bond, instead of being scattered among arenas. “I think that adds a lot of strength for the community.”

Sima, who rides out of River Run Farm in Long Valley with her partner, Devin Ryan, led off the tie-breaker of 12 riders from the field of 28 competing over Skip Bailey’s course in the mini-prix.  After overhearing one of the riders talk about making a difficult, time-saving turn following the first fence, she decided to try the maneuver, with Devin advising “go for it…make everyone chase you.”

She pulled it off with her “phenomenal” Selle Francais mare and became the only person in the tie-breaker to finish fault-free.

Discussing her success, Sima cited the support of her mother, Susan Morgello, and groom Eliane Feltz. A native of France, Eliane can reassure Orientales (also known as Chantilly) by speaking French to her, since that is the mare’s “first language,” the one she heard before being imported to this country.

Those who finished behind Sima in the class included Devin, fourth on the eye-catching chestnut, Florida. Devin, who was named this month to the U.S. show jumping team for the FEI World Equestrian Games, enjoys Monmouth at the Team not only as a good place to put mileage on jumpers (he’s always looking to develop his next big horse) but also as a chance to compete a convenient 20 minutes or so from home after spending time in Europe, most recently in Aachen and Dublin. 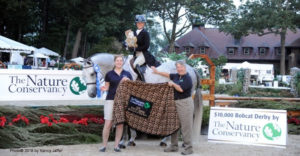 B.J. Ehrhardt, who took hunter and jumper style awards, won the 3-foot portion of the Bobcat Derby on Leah Creamer’s Dutchbred, Micah 7:7. She grew up in northern New Jersey’s Bergen County and showed all over the state. Now based in Goshen, N.Y., she still has a lot of friends in the Garden State, including Leah, who is from Saddle River and names her horses after Biblical verses.

The show is more than business for B.J.

“I love the whole ambience of it. They’re so pleasant here. It’s a great experience for my students and myself,” she said, noting that with the one ring, everyone can come and watch the classes because they don’t have to be running around to other rings.

“It’s all win-win to be here and be able to win,” she commented.

The 2-foot/2-6 section went to Heartbreaker and Libby Shea Dayton from Red Oak Farm in Stirling.

The Selle Francais belongs to the Storms family, but he hadn’t shown awhile since his owner went to school.

“This is his first attempt back. I think he did a pretty good job,” said Libby, who is trained by her mother, Bethie Dayton.

This was the first year the derby was broken into two sections, since management felt that the 3-foot competitors had dominated previously and wanted to give those jumping lower heights a chance for victory.

The derby is sponsored by the Nature Conservancy. It’s a fundraiser for Bobcat Alley, a 32,000-acre area on the border of Sussex and Warren counties where the organization wants to buy more land (the wish list is for 3,500 additional acres) so the endangered cats can move safely between the New Jersey Highlands, the Kittatinny Ridge and part of the Appalachian mountains.

Although some bobcats were imported from Maine to grow the bobcat population, there are only an estimated 300 to 400 in New Jersey.

Bobcat ear headbands with little tufts on top were much in evidence at the show, and those who taped them to their helmets got an extra point in the derby.

The USET Foundation will have another big hunter/jumper show in May, with the Junior Essex Troop’s Garden State fixture moving from Sussex County to Gladstone. Tucker will be managing it, and already is planning for the nine-day competition that likely will have a familiar feeling for those who have been to Monmouth at the Team.

“I think the shows will complement each other well, because now people know what kind of hospitality they can expect, they understand the footing can hold up to any kind of weather conditions,” said Tucker.

The iffy August weather might have wreaked havoc at another showgrounds, but not with the super drainage of the foundation’s ring.

“We had two days of steady rain,” observed Michael.

“The kids rode through it; the footing held up beautifully. It was a tribute to the facility and the reason we want to see it utilized and see our neighborhood enjoy it.”

Tucker noted that, “Sponsors already are lining up for Garden State. The shows will be a little bit different and distinct. The May show will be AA-rated, while in August, we have more grassroots focus.” He noted, however, that the first weekend of Garden State will be unrated with a $10,000 hunter derby before seven days of the double-A competition.

Barbara Brummer mentioned another initiative of the Nature Conservancy involves restoring habitat in the Paulinskill watershed for American shad, so I can see fish fins and tails taped to helmets if the organization decides to sponsor that derby at Garden State.

Asked how he analyzes the success of Monmouth at the Team, Tucker said, “Whether it’s food, décor, the courses or the awards, we don’t cut corners.  If you don’t cut corners, you end up with a better return, because people know they can count on you.”