It’s an idea whose time has come—again.

The MARS Essex Horse Trials was a popular stop for eventers during the 1970s, ‘80s and ‘90s—attracting marquee names in the sport–until the 2-star event was discontinued after its 1998 edition. Its revival in 2017 was a success, with Preliminary as the highest-rated division, and Essex went on to solidify its standing in 2018. 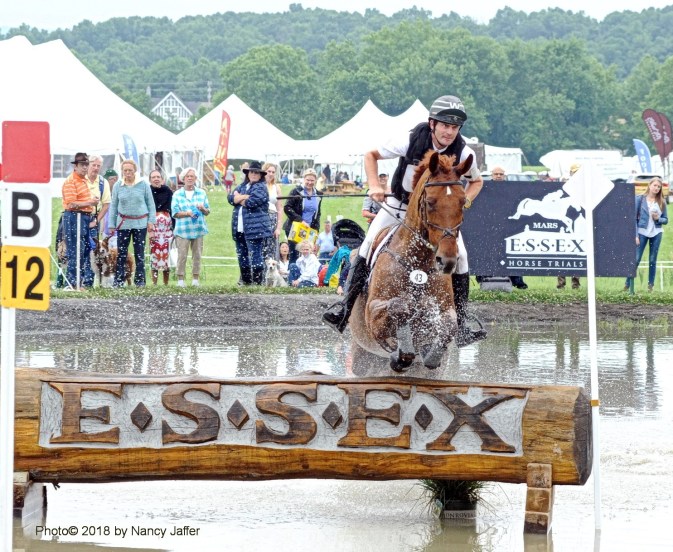 Ryan Wood, the 2018 Preliminary winner with Ruby, will be back this year for the new Advanced section and other divisions. (Photo©2018 by Nancy Jaffer)

This year, the June 21-23 event presented by MARS Equestrian has upped the stakes. It’s offering an Advanced division for the first time (skipping Intermediate), and the big step forward is being well-rewarded with entries from some of the top riders. Phillip Dutton, the 2016 Olympic eventing individual bronze medalist, will be bringing his best horse, Z, and his close friend, Boyd Martin, also is coming.

“I’ve got a couple of horses who need a run around the Advanced level at this time of the year,” said Boyd, explaining why he decided to enter the competition at Moorland Farm in Far Hills.

“I’ve heard great things about Essex; it’s an event with a lot of history. I’m looking forward to spinning a few around for the first time. It’s always a challenge going to new places, but riding at the very top level, you get to know which are the good events that have the good courses. 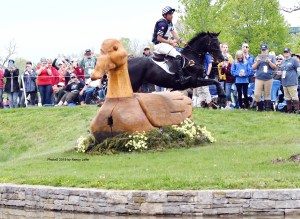 The MARS Essex Horse Trials’ Advanced Division has attracted Boyd Martin, whose second-place finish at the Land Rover Kentucky event last month made him the top U.S. rider at that competition. (Photo©2019 by Nancy Jaffer)

“It’s a little bit nerve-wracking going to a brand new event. Sometimes it takes a year or two for the designer to figure out the track and the course, but Essex is a great venue and a good course designer, so it should be a good event,” noted Boyd, the highest-placed U.S. rider last month at the 5-star Land Rover Kentucky event, where he finished second.

The rebirth of Essex came about as the result of the 2015 “Gladstone Gathering,” held at the U.S. Equestrian Team Foundation stables for area equestrians and those interested in the sport.

Jim Brady, whose family once owned Hamilton Farm, the foundation’s home in Gladstone, felt that the area wasn’t hosting as many top-class equestrian events as it once did. He revitalized the old Gladstone Equestrian Association, and came up with the idea for the party.

Essex previously was held at Hamilton Farm, but construction of a golf course meant there wasn’t enough property to continue the event at that site, leading to its cancellation.

Tewksbury resident Ralph Jones attended the Gathering and was inspired to think Essex could be revived.

“I was just thrilled with the idea of starting it over,” Ralph said at the time, and pitched right in. He’s co-chairman with course designer Morgan Rowsell at Moorland, home of October’s Far Hills Race Meeting.

“What says `Essex’ is being able to run on that track,” Morgan commented, noting part of the cross-country course will go over the turf used for the races on the 230-acre property, just down the road from Gladstone..

“It just doesn’t get any better than that footing.”

The addition of the Advanced section is an effort “to gradually bring this event back to its glorious past,” said Ralph, “and to do that, we need to attract more of the professional riders.”

Added Morgan, “it will be an international event at some point. Ralph and I and Julie (Berman, director of operations and hospitality) and the team are dedicated to doing it right.

“The community’s been very eager to be involved,” said Julie. “There’s a lot of buzz on being part of Essex. Everybody wants to be a part of history and bring it forward.”

Word about Essex has gotten around, and well-known riders are coming in droves. The demand matches the prize money; there’s $10,000 more being offered this year than last year, for a total of $30,000. 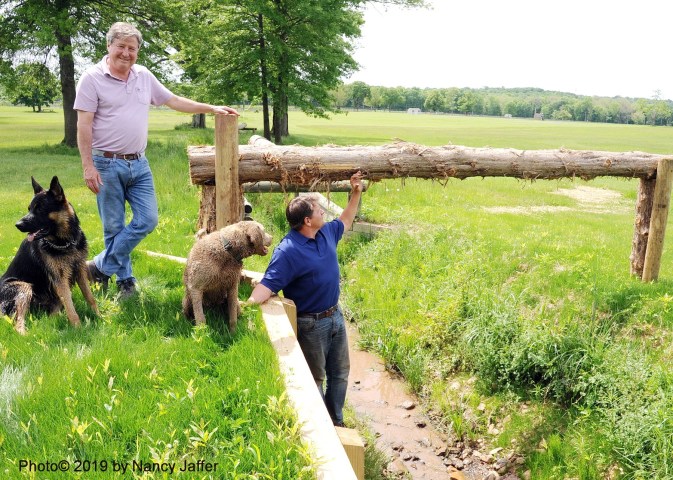 Buck Davidson, a regular visitor who starred in the reborn 2017 Essex edition, will be competing, having recovered from a fall at Land Rover Kentucky that left him with a broken collarbone. Others who will be seen there are Will Coleman, Lauren Kieffer, Sharon White, Colleen Rutledge, Hannah Sue Burnett, Jennie Brannigan, Canada’s Jessica Phoenix and Ireland’s U.S.-based Ryan Wood, back with Ruby, his 2018 Preliminary winner. She’s entered in the Preliminary Essex division, which is more challenging than the Open Prelim division. He’s also is bringing Woodstock Bennett for the Advanced section.

It’s a terrific opportunity for Jerseyans to see top competition close to home (Moorland is a five-minute walk from the Far Hills train station), and it offers a great introduction to eventing for those who enjoy horses but haven’t had a chance to see this discipline in person.

I went over to Moorland on Route 202 to get a look at preparations for this year’s Advanced course. Former U.S. eventing coach Mark Phillips, designer of the Jersey Fresh and Burghley, England, cross-country courses who is Morgan’s mentor, had visited as well. He gave advice and a thumb’s up. 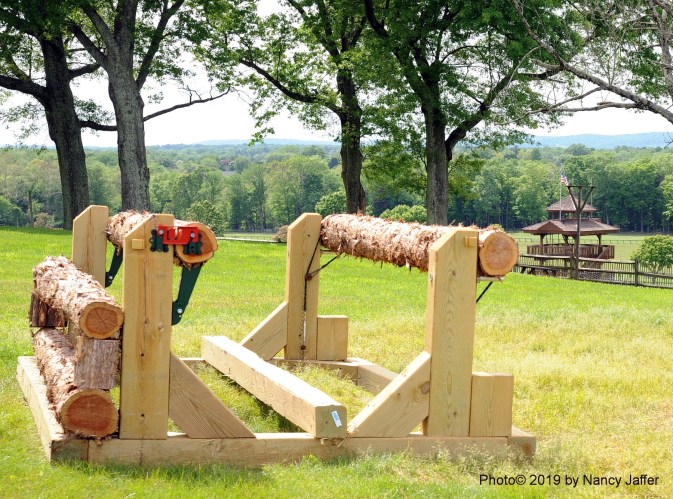 This oxer won’t be in this location for the actual event, but it was placed there for a photograph to show some of the scenic surroundings at Essex. (Photo©2019 by Nancy Jaffer)

Most interesting to me was work on a timber obstacle that Morgan described as, “big and impressive,” no over-statement there. It will stretch nine feet across, erected over a ditch five feet deep, with a center bar to fill in the gap for this first year of Advanced.

Trees will be placed on the vertical posts to define the jump and enable the horses to judge the scope of the fence. It’s appropriately called the Liberty Corner Leap, named after the road that runs along one side of the property.

Ralph estimates that midday on the Saturday, June 22, will be “prime time” for spectators who want to see the Advanced riders in action on the most challenging route that Essex offers. The Advanced horses will not only go through the impressive water complex, but they also will be jumping in the main arena as the path for their division winds through the property.

“We’re trying to dedicate ourselves to safety as much as possible,” said Morgan. He noted about one-third of the jumps at Training Level and higher have frangible elements, while another third involve brush.

He explained the MIM clip activates to release its rail on horizontal pressure, which is what would happen when the horse is on an upward trajectory, while the frangible pin activates on downward pressure, so if a horse doesn’t get across the entire distance of the obstacle, the pin breaks and the rail drops.

A frangible table jump, donated by Essex supporters Carl and Cassie Segal, also offers a safe alternative on the Advanced course if a horse hits it, folding down on impact. Such tables are very expensive, but Morgan would like to see one added every year. 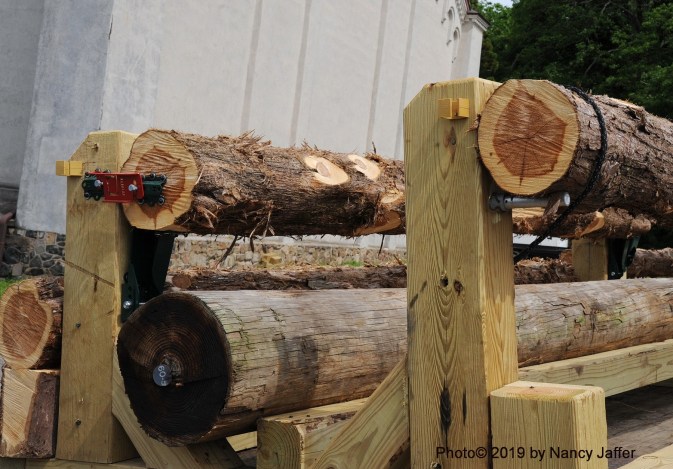 The MIM clip, left, and frangible pin, right, are safety devices that will be used during the Mars Essex Horse Trials (Photo©2019 by Nancy Jaffer)

The days at Essex will be busy. Advanced dressage takes place Friday, June 21, and that division’s show jumping will run during the early evening in conjunction with a VIP cocktail party. The Advanced cross-country is set for Saturday, June 22, along with all segments of the Preliminary competition, which features show jumping in the early evening that day, along with a competitors’ party at the Hoopstick Club. The lower levels will take place on the Sunday.

The children’s activity tent, provided by the Willow School, will be open both Saturday and Sunday, as will the Edible Jersey Food Court and the Essex Market vendor village. With MARS Equestrian as the presenting sponsor, it’s no surprise to learn that there will be a MARS candy hunt for children Saturday and Sunday.

The beneficiary of the horse trials is the Greater Newark LifeCamp, located on 90 acres of fields and woodlands in Hunterdon County. It provides an enriching summer day camp experience for 300 Newark-area youths per day for six weeks during July and August. Campers between the ages of 6 and 13 come from the greater Newark public school system, as well as from Newark Charter School Programs.

The mission is to empower youth to succeed by developing life skills, character and leadership through a program outside an urban environment

For more information on Essex or to buy tickets, go to www.essexhorsetrials.org.